(This was a small trip with Pradosh’s parents, while spending Christmas holidays with them. Not really like our other trips around Bombay, but we had a great time nonetheless, so here it is)

Puri doesn’t need much introduction. It is one of the char dhams of Hinduism, site of the famous Jagannath Temple and the annual Rath Yatra.

(For bengalis, it the number one quick vacation from Calcutta (the other being Darjeeling). There are 8 (EIGHT) trains dedicated just for Puri everyday (apart from other long distance trains). As a result, Bengali is lingua franca in the town, with most of the seafront hotels having lots of Bengali dishes on the menu and the main city beach (Swargadwar) is almost overrun with Bengali tourists
If that doesn’t sound appealing, it isn’t meant to be)

However, Puri also has one of the longest stretches of beach on the Indian mainland. The sand is golden brown in color and stretches for miles, on both sides of Puri town. The city beach next to Marine Drive (Swargadwar) is crowded for sure, lined with old style hotels. However if you skip all that and head to the newer resorts, a little further from the crowded main beach, you will be rewarded with one of the best beach experiences in the country.

We chose one such resort – Toshali Sands – for our stay.
(The other recommended stays are the two Mayfair properties – Waves and Heritage) 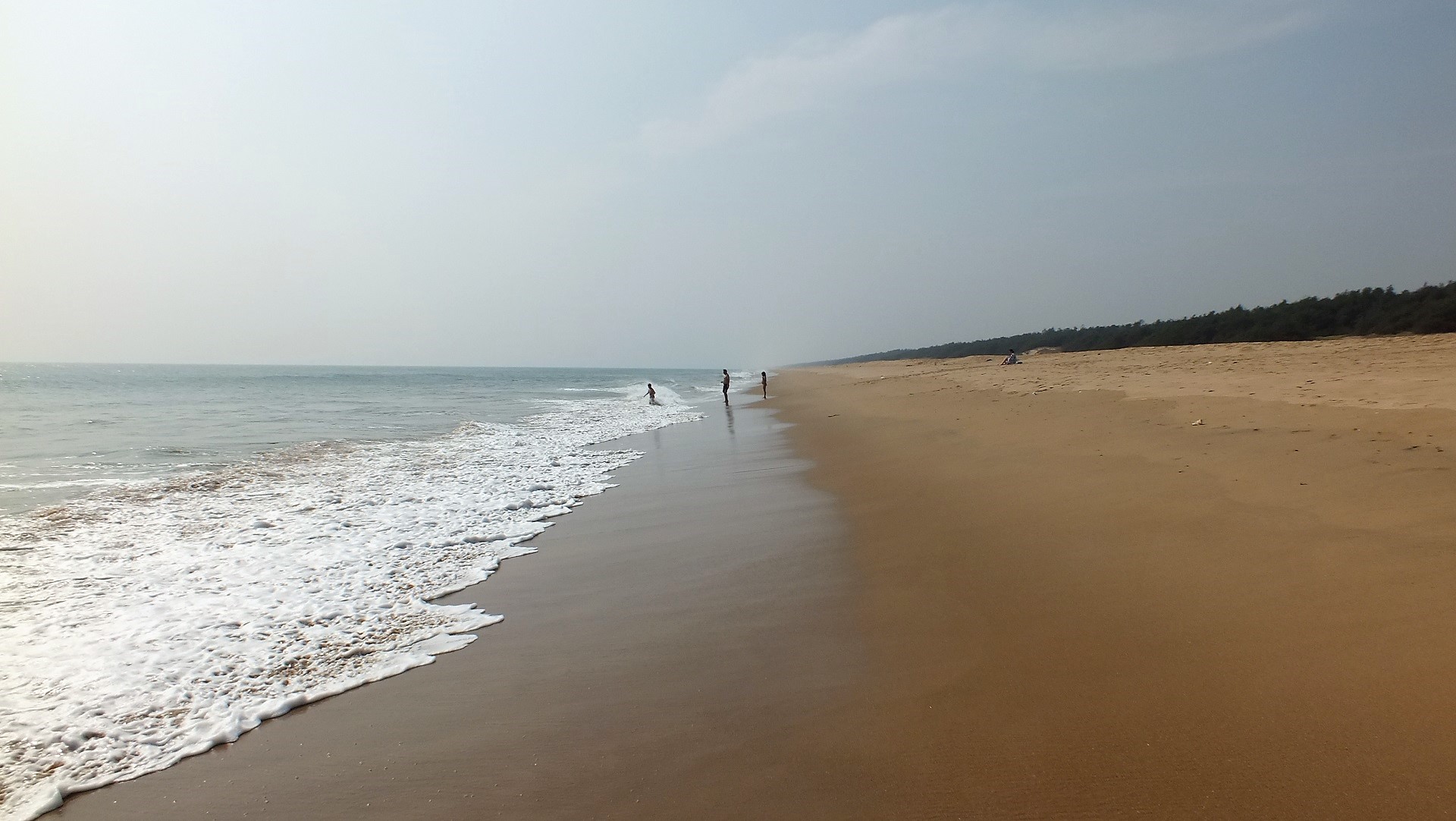 Toshali Sands is located some way out of town (7-8 km), on the road to Konark. It is not situated on the beach, but it has preferential access to the beautiful Balighai beach (above), which is about 2 km away. A kuchha road leads to the beach and passes through a forest (only deer and cashewnut trees in the forest). Anytime you wish to go to the beach, there are hotel minivans to drop you there, and bring you back. There is a hotel lifeguard at the beach who has a stock of straw mats and towels – so you can rub yourself dry after a dip in the water and lie down and soak up some sun.

And what a splendid beach it is. On both sides as far as the eye can see, it is spotlessly clean, empty, lined by trees on one side and water on the other. With only a few hotel guests at the beach, you essentially have a huge beach all to yourself. If only it had beach umbrellas (and beer), we’d have called it the best beach ever 😀 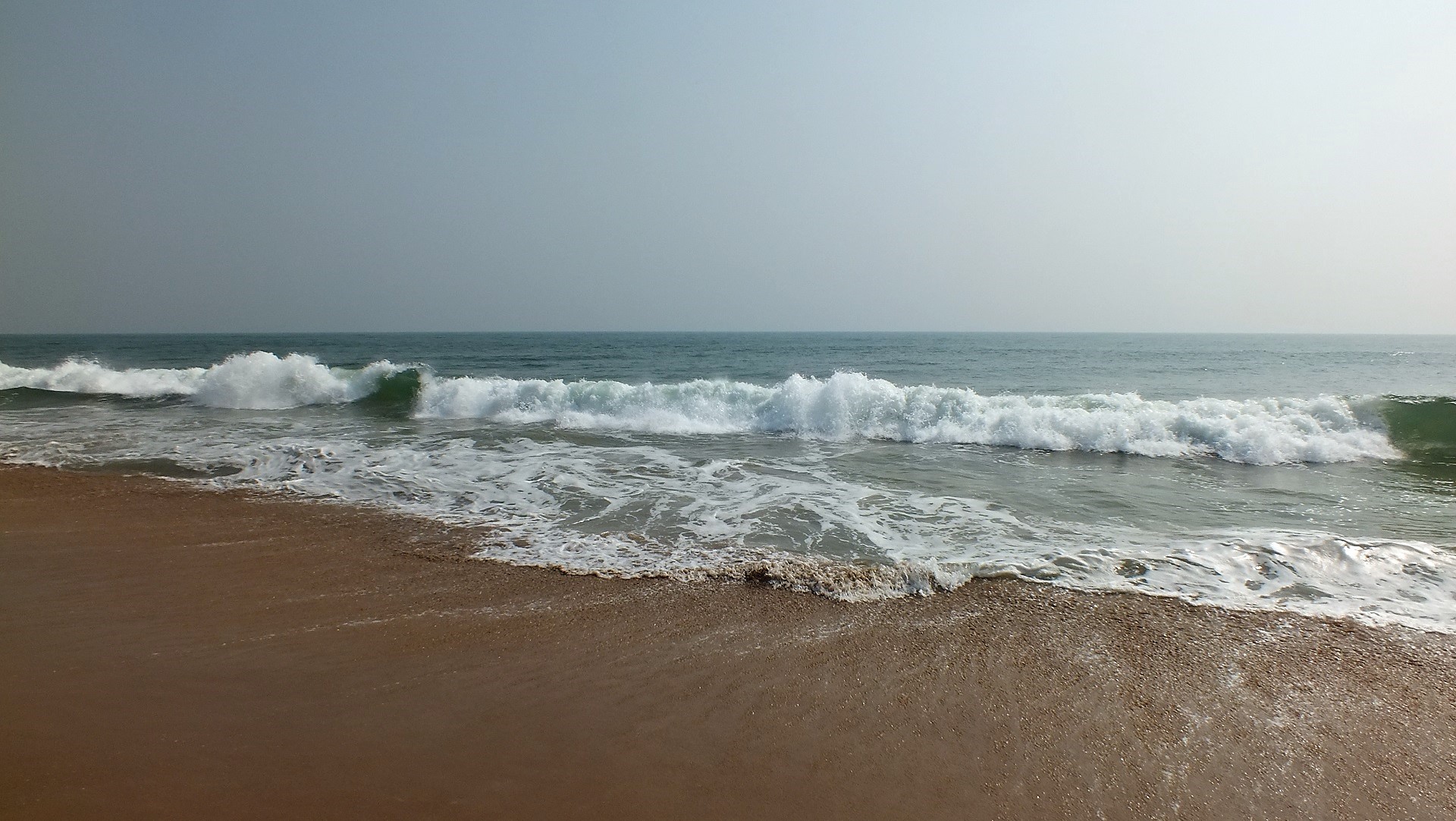 And we haven’t talked about the best part of the Puri beach yet – the waves !

In Puri, the waves you meet are much bigger and stronger than anything you have seen in Maharashtra, or Goa or Kerala. They will throw a heavy man like me (Pradosh) off balance or wash him a few meters way even when you anticipating the big wave. It may not be to everyone’s liking but we found it supremely fun to negotiate the somewhat rough sea. Downside is that it is not safe to venture too much into the sea because the sea slopes down significantly and has some tricky currents. 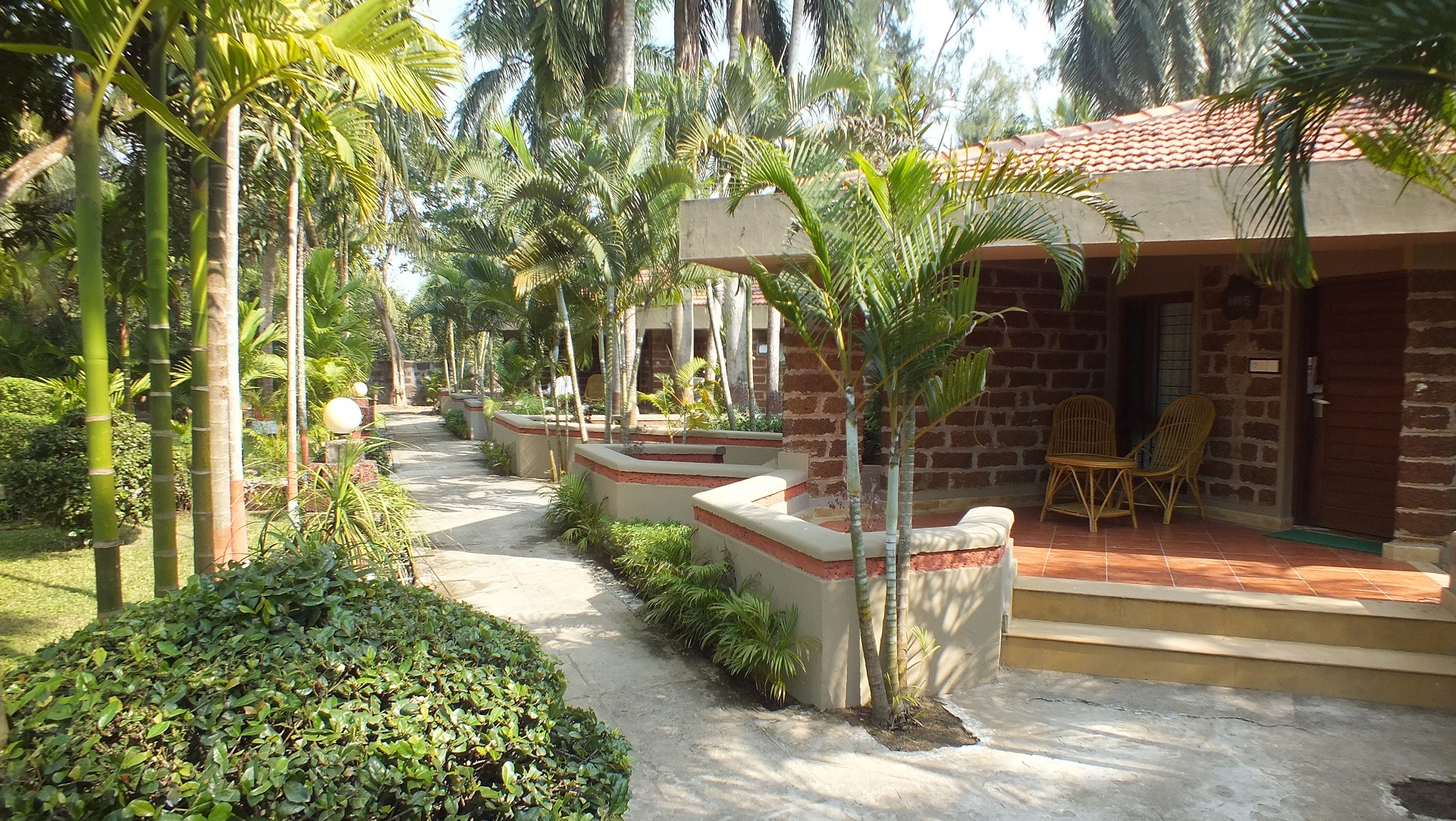 The cottages in our resort were very nicely furnished and had beautiful verandahs – which in the mellow December sun – were perfect for having evening tea. Food was equally good – the buffet was surprisingly good in options and taste, with additional a-la carte menu. It was just a wee bit chilly at night, needing a light jacket or a shawl. And it made the bed feel so much cosier

It wouldn’t be right to visit Puri and not do a darshan of the Jagannath temple. However it turned out to be very disappointing experience, as the whole place seemed very mismanaged. There is no visible temple management, with no clear entry/exits, no officials helping pilgrims or any signboards clearly showing the way. Instead, all over the temple complex, pandas (the priests of Jagannath temple) sit on the ground like at some dirty village market, selling bhog. Imagine one of the holiest temples of India, whose entire courtyard is strewn with people selling khichdi, pulao and daal in open vessels at every nook and corner outside the main temple.
(There are 6 bhogs everyday at Jagannath temple, where huge quantities of such prasad is offered to the the deity, after which devotees can buy it from these pandas)

Pandas are one sect of Brahmins who have a monopoly on offering pujas at the Jagannath temple in Puri. They routinely find mention in the “warning” section of any Puri guide/travelogue. Pandas are known to bully and scare tourists into expensive bhogs or pujas, and are known for being quite aggressive. They can be found all over the city, including the railway station itself, tagging onto arriving passengers, promising inside access to the temple deity etc.

We did not use services of any panda for our darshan. While it is quite easy to do darshan on your own, the lack of proper temple management becomes very apparent when you do this. For example, like any major temple, footwear has to be left outside the temple gate. But when we finished our tour, we found our original gate closed. We were pointed to another exit which led to a road adjacent to the temple. It was an asphalt city road, dirty and with loose stones and teeming with two wheelers, cows and vegetable vendors. We had to walk barefoot for about 200-300m on the dirty road, back to our footwear shop.

None of us had ever been to Chilika Lake, famous for Siberian cranes and other migratory birds (and also the largest lake in India apparently). The closest entry point to the lake is Satpada, about 50km away from Puri . However we skipped on the research a bit this time, and as it turns out, Satpada, is not the best place to see Chilka from.
(For that we should have gone to goto Barkul, which is more than 100 km away from Puri) 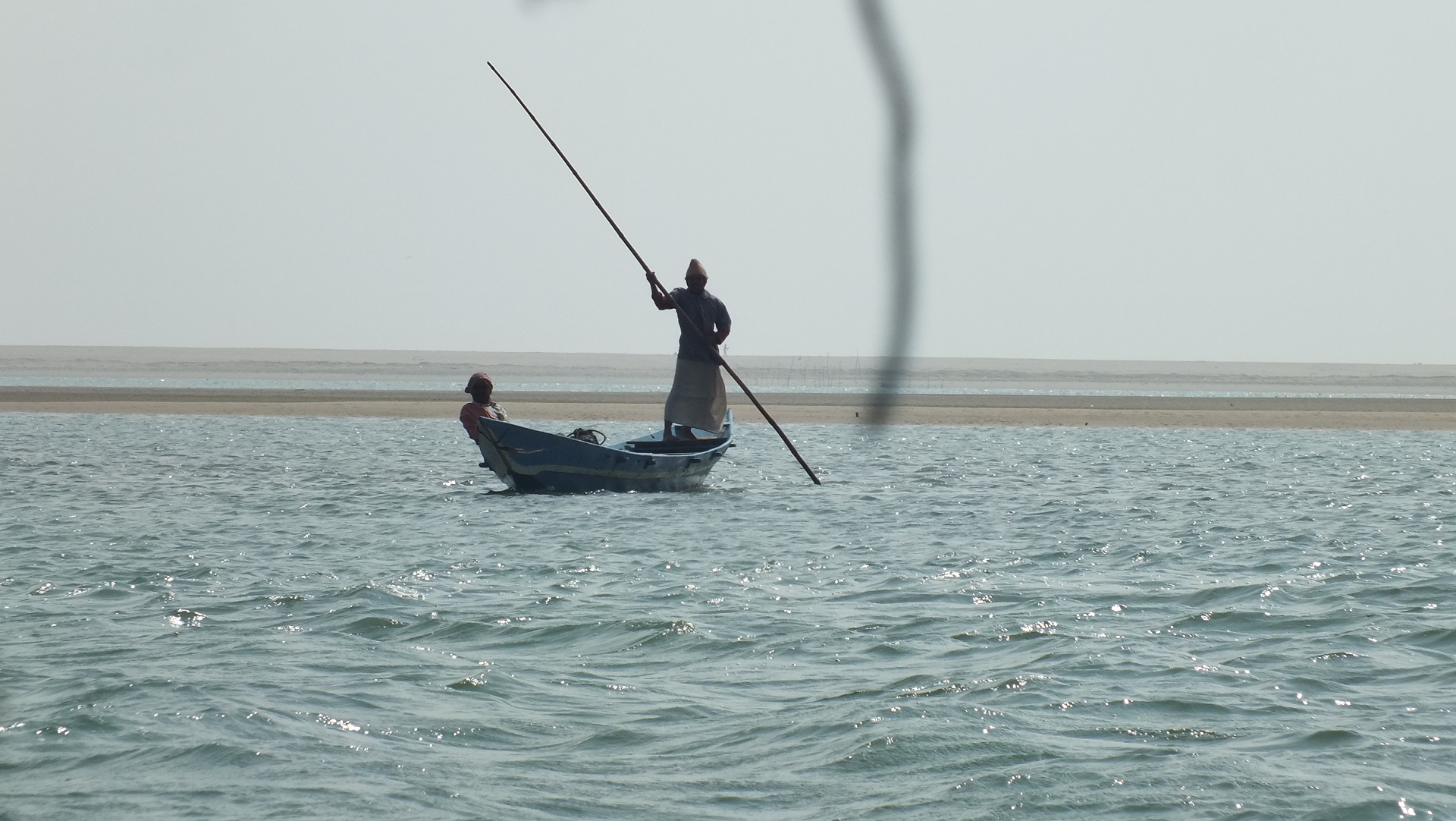 Our boat trip from Satapada was quite unremarkable. The boats (below) used for these trips are country boats fitted with the Greaves diesel engine found in most diesel autos – meaning a too-loud-to-talk cacophony. The boats can comfortably seat upto a dozen probably, though we saw boats loaded with upto 20 people in it (we were only 4). And there were so many boats because of the holiday season, that it seemed like a veritable packed highway, replete with overtaking and all! The worst came when we went dolphin spotting. At every sighting of the poor creatures, some 20 boats would race towards it, probably scaring the crap out of it. 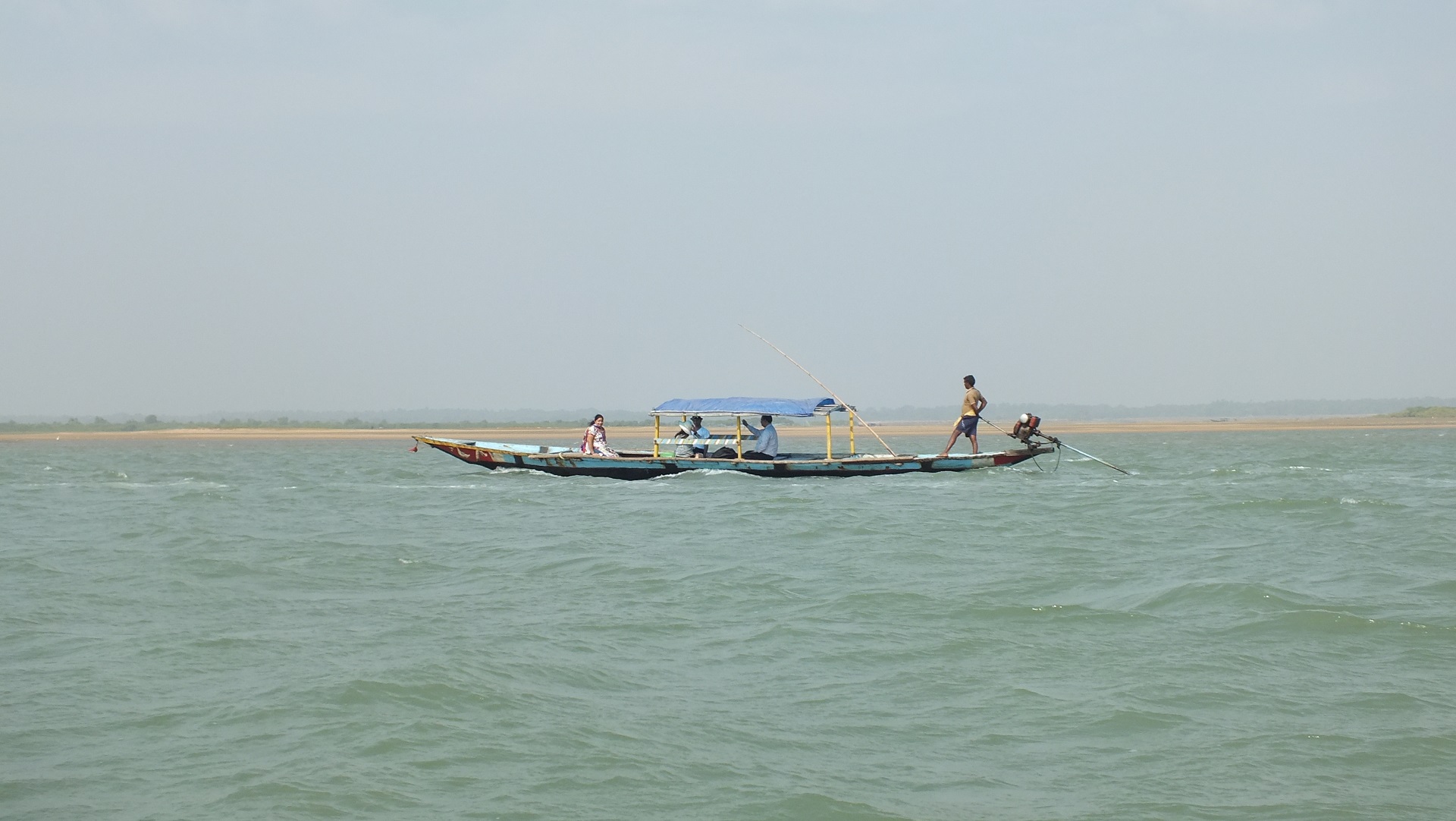 Satapada is close to the sea mouth of Chilka lake, good for dolphin watching but nothing else. The 4 hour trip cost Rs 3,500 per boat (again holiday premium). Apart from the dolphins, there wasn’t much to see on our trip – some small villages perched on the lake of the shores, and the one commercial stop made on one of the islands, where you can buy and sample the famous Chilka prawns and fish. If migratory birds are what you seek, remember to head to Barkul near Balugaon.

On the third day of the trip, we headed to the famous Sun Temple in Konark. The road from Puri to Konark is one of the most pleasurable drives, as the sea keeps playing hide and seek for most of the road, till you reach Chandrabhaga beach. For the next 7 km, the road runs next to the unspoilt Chandrabhaga beach, where you can stop and get down anywhere you want – and have a magnificent beach all to yourself.

The Sun Temple is a couple of km away from the sea now, but at the time of its construction, it stood next to the sea. The UNESCO world heritage site built in the shape of a giant ornamental chariot for the sun god, riding on 12 pairs of ornate giant wheels. The Konark wheel has become the identity of the temple and has been adopted by lot of Orissa state government and its agencies. The main part of the temple, the vimana apparently collapsed in the 1840s, leaving only the Natya Mandir and Jagmohana standing today. Even the Jagmohana is closed from the inside, leaving room for tourists only outside. But even in its incomplete form, the scale and the imagination of the builders make it a magnificent structure. 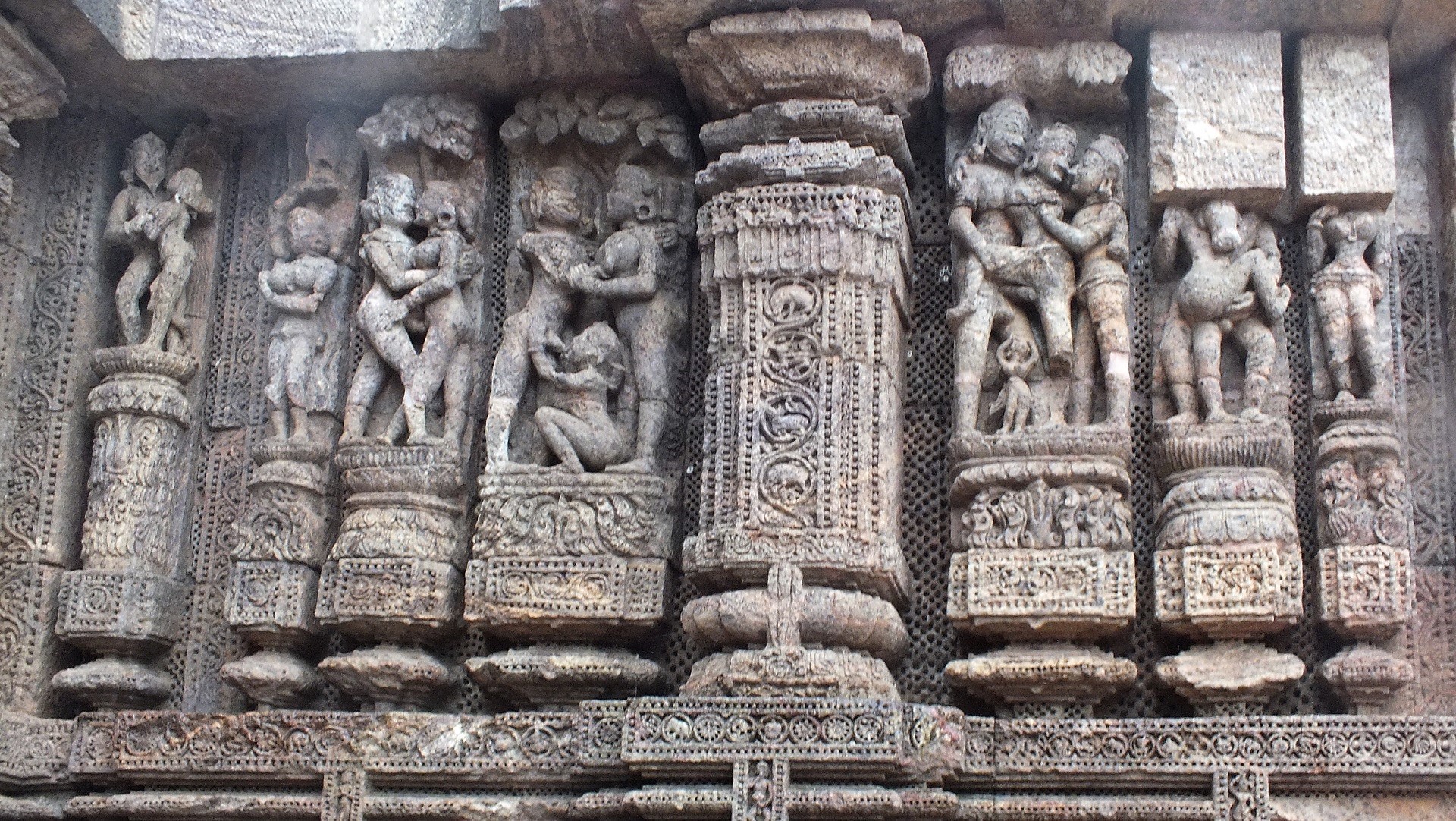 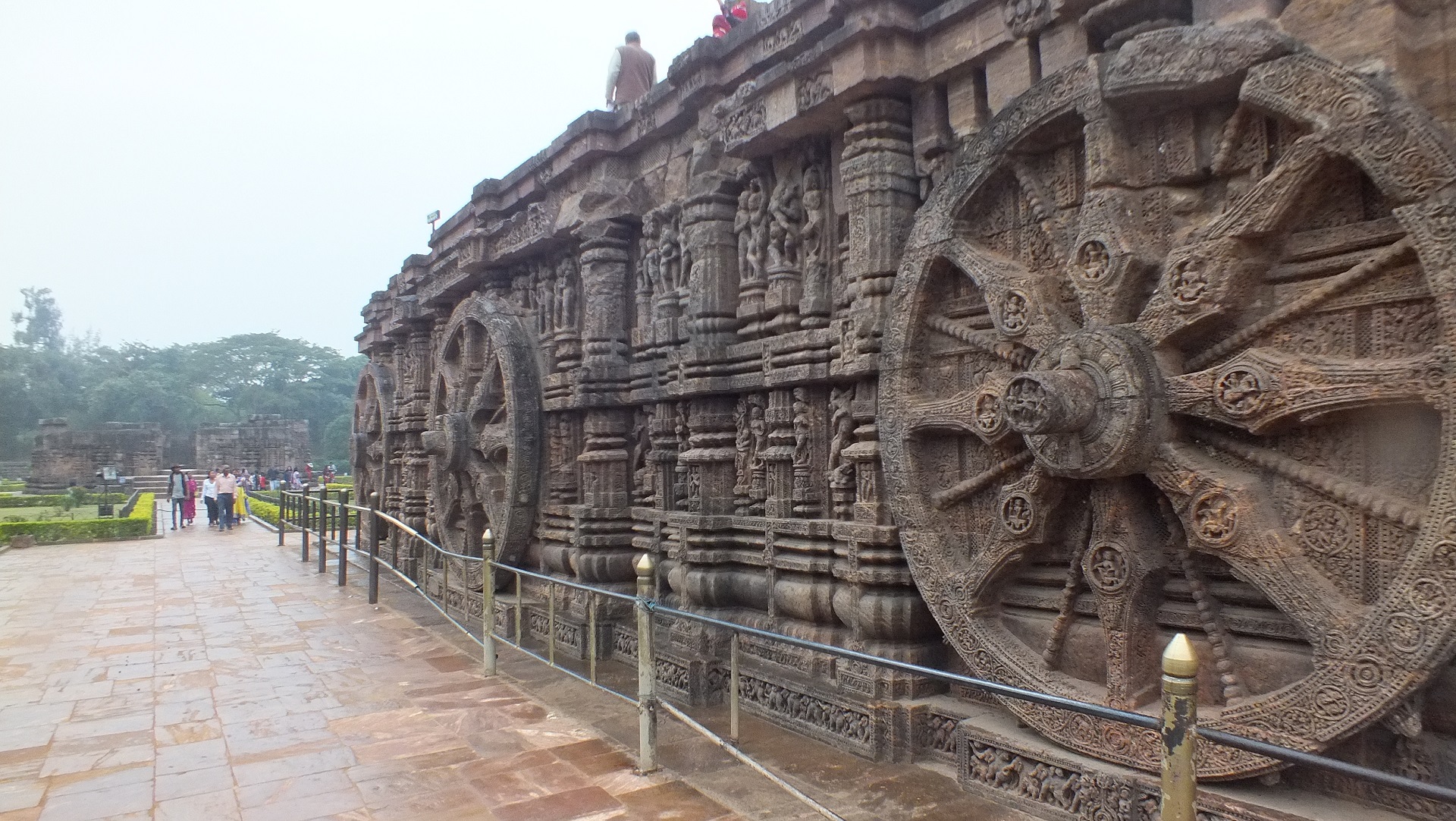 However, even this beautiful UNESCO World Heritage site is let down by the mismanagement by the Orissa government. The entrance to the temple is far away from the car parking, with no provision for drop and pickup. And to top it all, the 100m walkway to the temple entrance is crowded on both sides with shops selling touristy trinkets, completely blocking the view of the temple. Only after crossing the “market” and entering the complex can one finally lay eyes on the temple.

One thought on “Puri / Konark”