Watching Jeremy Clarkson & co review newly launched cars on Top Gear, or their Indian brethren on Autocar Show etc, have always made me so jealous. They actually get paid to drive around in new cars everyday to test them. Long drives, picturesque locations, they seem to have it all

Till this Sunday, when I got to do the same with a fiery red coloured Tata Bolt, courtesy Tata Motors and Blogadda. It was a trip to Lonavala and back in the newly launched Tata Bolt. It was an event for bloggers to experience the car for a full day, with some fun activities along the way.
(also, now I am even more jealous of motor journalists)

We started off in the swish Café Infinto in Bandra Kurla Complex, where a line of red Bolts stood waiting outside.

I was paired up with Mahafreed (@mahafreed) and Lancelot (@Lanzomaniac) as team D2. We started off with a scrumptious breakfast, after which there was an introduction of all the bloggers attending. It was a fun format where one member of the team had to introduce all three in the most interesting way possible – all of whom had met each other only an hour ago. We got some very interesting intros, including @unishta who was the only grandparent in the room 😮 !

After a quick presentation about the car and dos/donts from the event manager, we kicked off for a quick event on the nearby MMRDA grounds. We were to drive the Bolt on the temporary track and draw a “connect-the-dots” figure while going over the speedbreakers. While I was handling the driving duties, @mahafreed was taking care of the drawing. I think we managed a fairly good drawing, and it was great activity to showcase Bolt’s comfortable suspension. We were kept company in the car by Blogadda staffer Ankita, who was coordinating with the rest of the team, taking care of tolls etc. 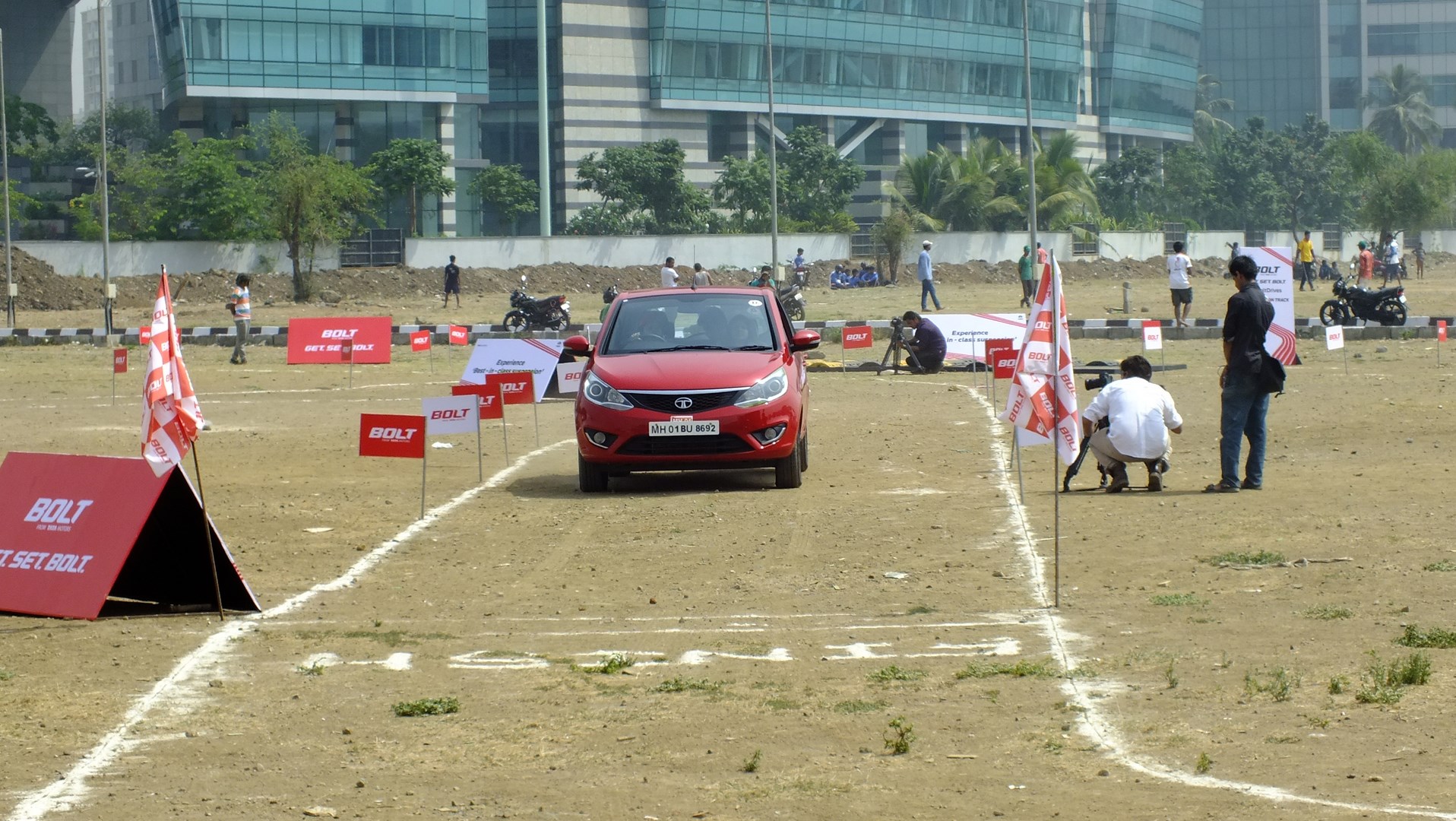 From there it was off to Lonavala via the Expressway. The initial city traffic gave me a good appreciation of the torque of the diesel engine – there was always power available to speed up through the gaps in traffic without necessarily shifting gears. Once we crossed Vashi, and traffic opened up a little, we were able to drive more freely.

On the Expressway, the Bolt was really shining. Initially when I was trying to keep to the official limit of 80kmph, the Bolt was super silent and smooth. But me being me, pretty soon I was doing 120 and the Bolt was still super composed. Just to check if I was the only one feeling it, I asked my co passengers to take a guess of what speed we were travelling at. They all guessed in the 70-90 kmph when I was actually doing 110 kmph. 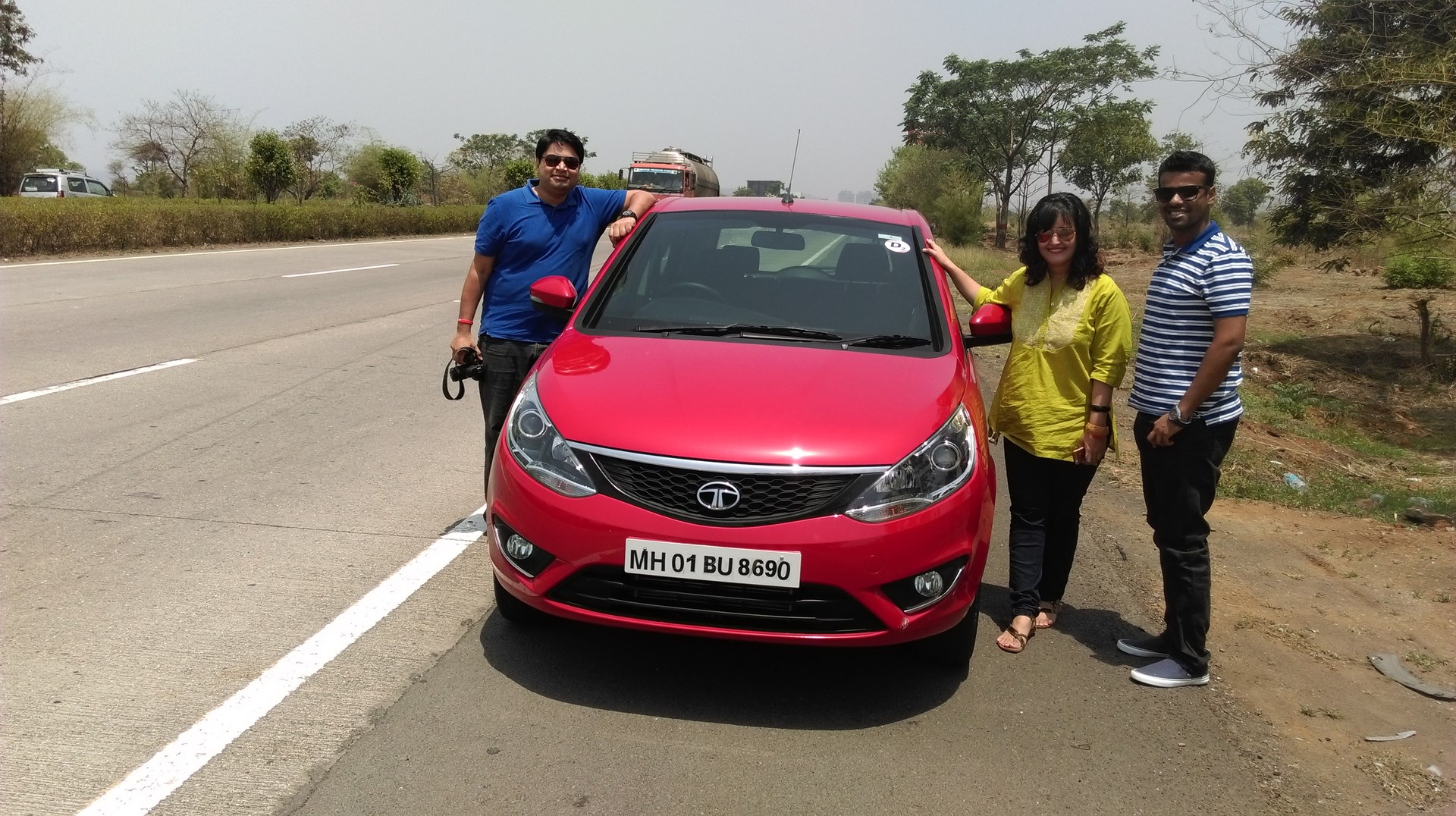 (I pushed the car a little before hitting the ghats and touched 140, and it felt like the car still had some more left)

At Lonavala, our halt was at Triose Mall, where the Dhaba restaurant was booked for us. Again excellent food, this time indian, and the entire group lazed around after lunch, while giving a minute long individual interviews to Blogadda 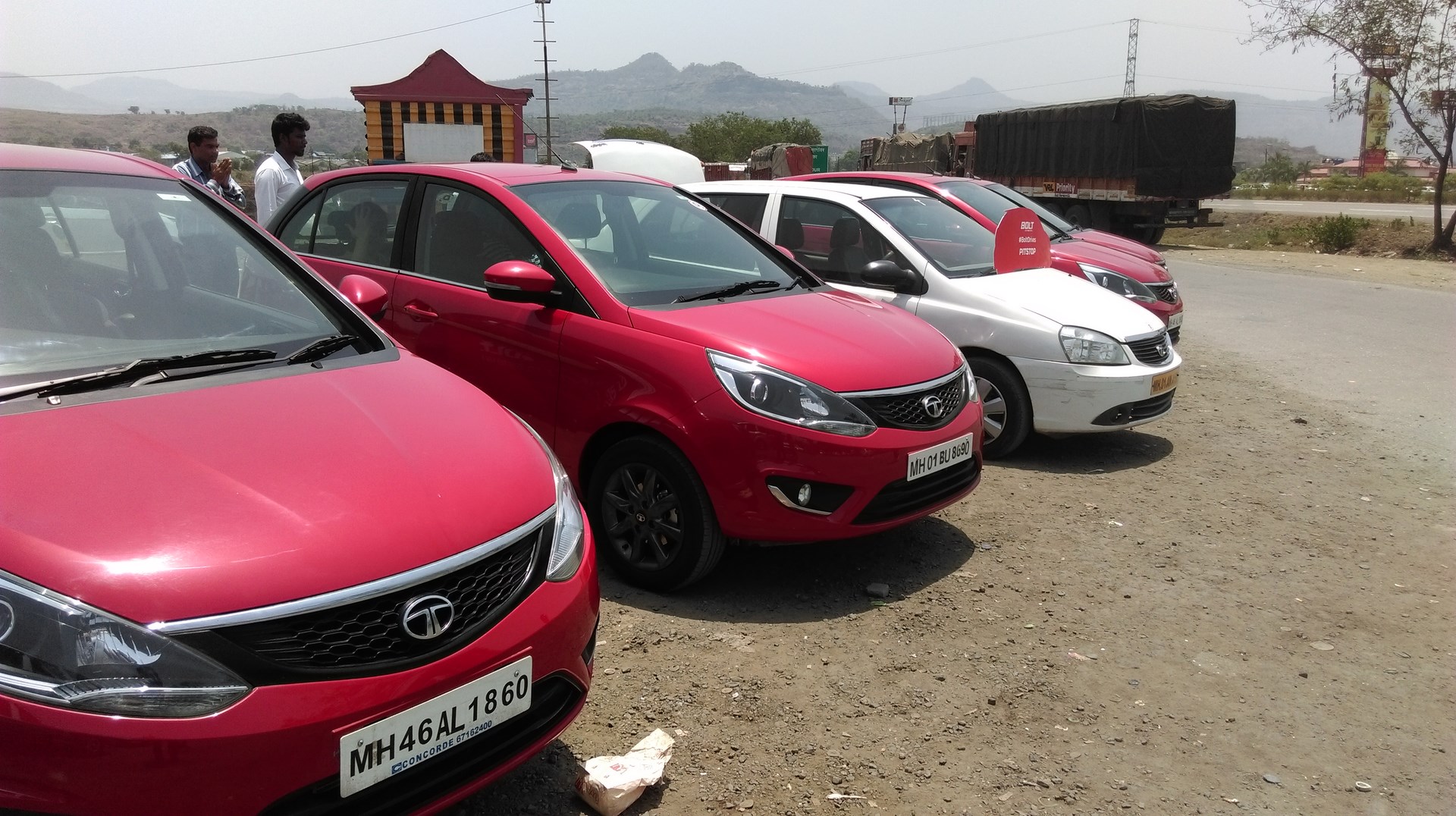 The lunch was also the cars swap point. All the petrols were swapped for diesels. We got into the Revotron petrol car and felt the AC wasn’t as powerful as the diesel. But that could have been because the cars were standing in the sun for almost two hours. And after the intial cooling, we did not have any other complaints about the AC. Post lunch was a drive to Tiger Point in Lonavala. It was a trick ghat climb, and it was interesting to drive the petrol. The three driving modes for the petrol Bolt have very noticeable differences in them. While I didn’t even bother with the Eco, there was significantly less power available in City mode vs Sport mode. Needless to say, I stayed in Sport mode all the way. It was my first turbocharged car, and it was an interesting feeling to have lot of power available even when you are slowing down, because the turbo is still spinning 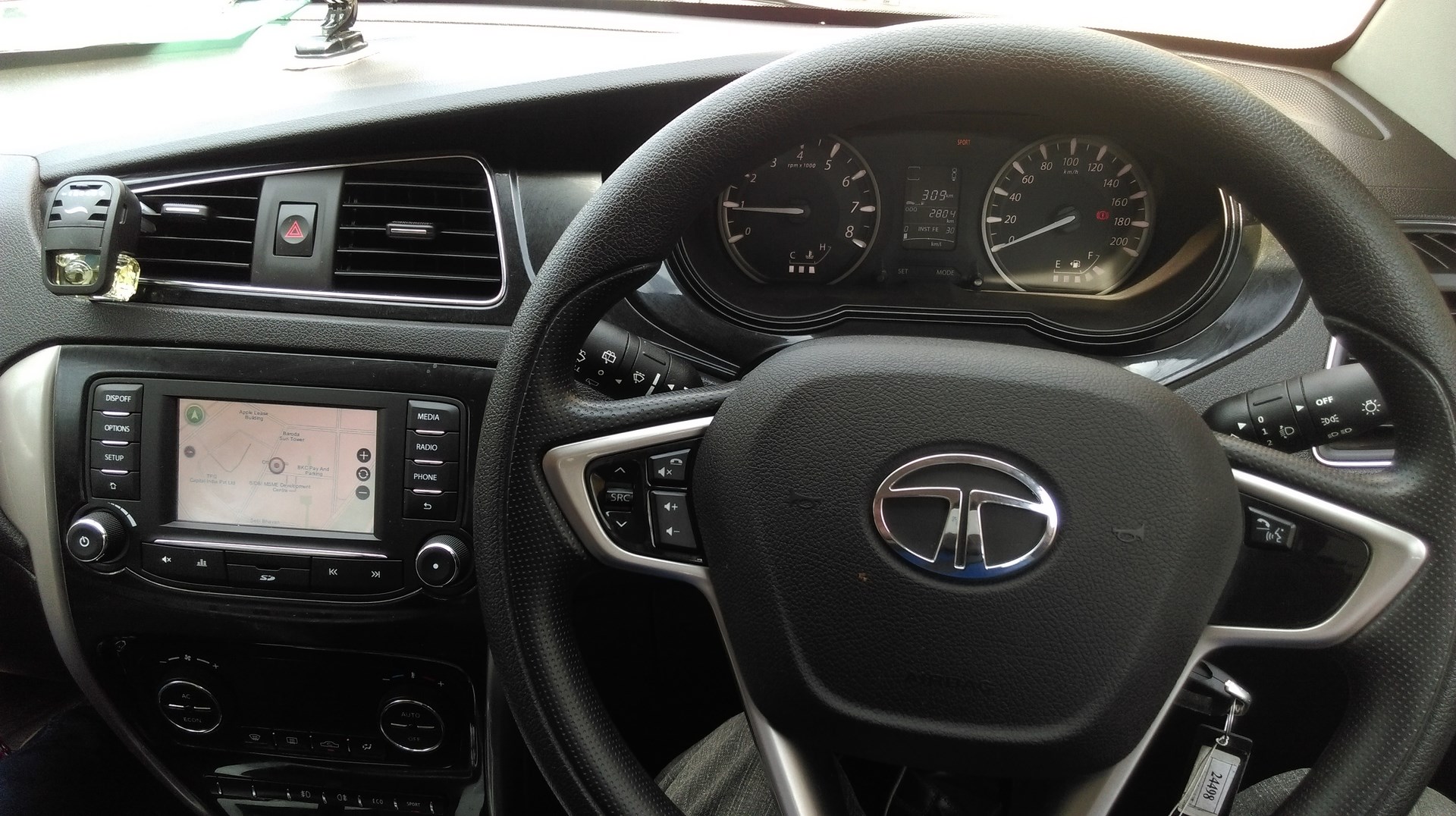 There was also the Captain Bolt on the drive “with us”. A very rich baritone-voiced “captain” called all the cars on regular intervals, speaking via handsfree. While he took regular updates on the journey, we indulged in some fun banter too, including his relationship status 🙂

My copassengers evidently felt I was doing a good job at driving, so they let me drive all the way. At the Tiger Point, we posed for a photoshoot with all the cars, although the sun was rather hot. The view was great, and you can only imagine how wonderful it must be in monsoons when all the browns become green. After that it was a ride home to Mumbai 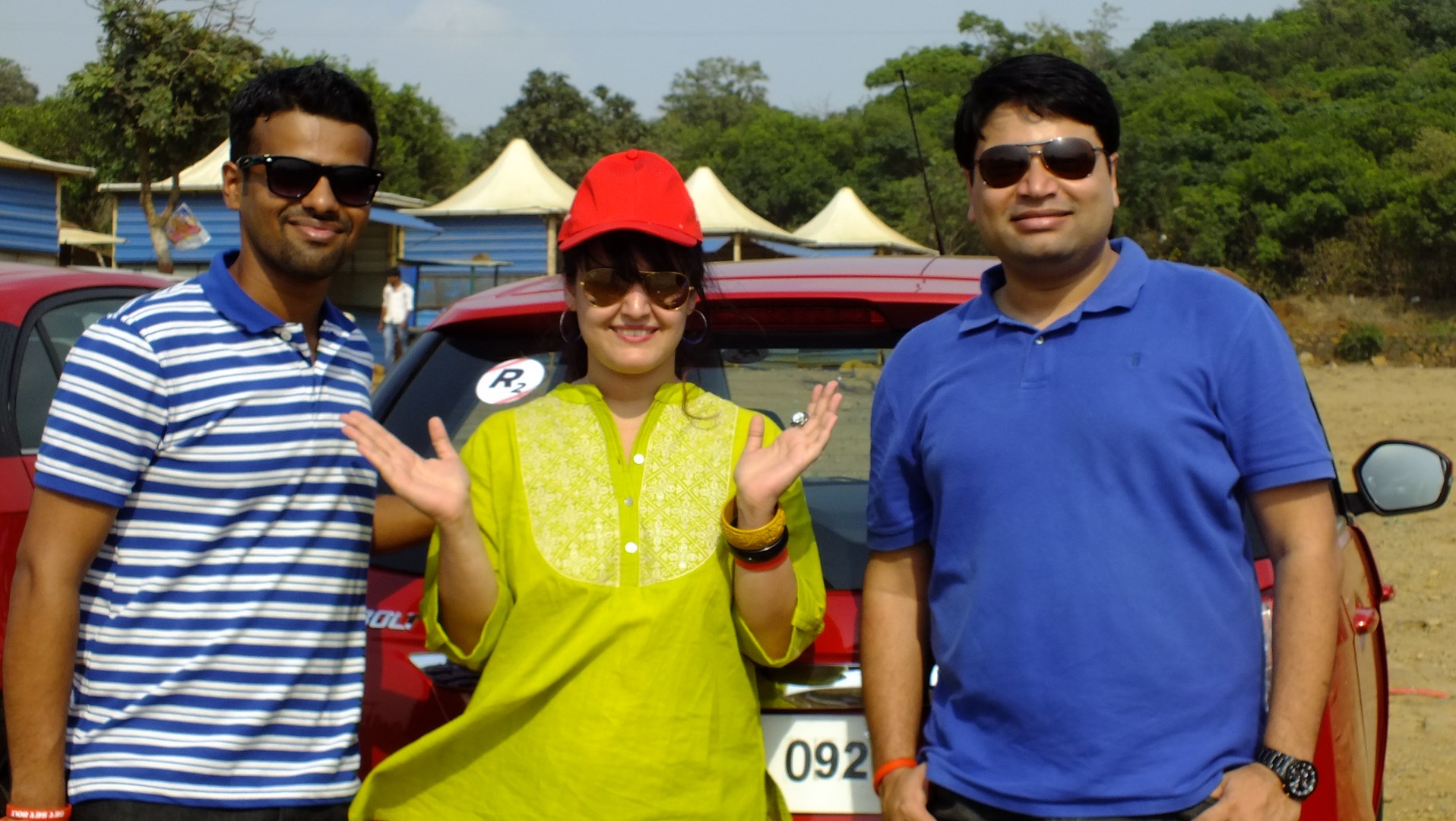 All in all, it was a great Sunday. Long drive, great car, excellent organization by BlogAdda, including the thoughtful little icebox filled with goodies for the road. And thanks to Tata Motors above all.

PS :- I also won the best photo of the day contest too

Disclaimer : This event was sponsored by Tata Motors

One thought on “Lonavala Drive with Tata Bolt”