If we go into India’s recorded history, the earliest written records we have belong to the Maurya kings (4th century BC) – mostly edicts and inscriptions left behind by Emperor Ashoka – or accounts of foreigners like Megasthenes and Fahein. The Nanda dynasty, who preceded the Mauryas, are mentioned by Alexander’s historians and made famous by the story of Chanakya, but they did not leave behind any physical evidence themselves.
The story goes that Alexander stopped his world domination march because his soldiers got frightened by stories of Nanda’s huge army (including 3000 war elephants), and refused to march any further

The oldest standing manmade monuments in the subcontinent are undoubtedly the Indus Valley cities, which date back to more than 4000 BC (or about 6000 years old). Their pictographical script hasn’t been decoded yet. But the expansive cities they built, with high amount of civic engineering and town planning, were unparalleled in the world at that time. The more famous cities of Harappa and Mohenjodaro are unfortunately located in Pakistan, but the sites in India are equally wondorous, as we discovered in Dholavira

But the oldest surviving examples of human civilization on the subcontinent, unfortunately, are not very widely known. Bhimbetka, in Madhya Pradesh, is the site of paleolithic – or stone age – paintings – which date back 15,000 years. A UNESCO World Heritage site, Bhimbetka was discovered in the jungle as recently as 1957, by Indian archaeologist Dr Walwankar. Even today, it is surrounded by lush green forest and falls inside Ratapani Tiger Sanctuary (apparently leopards are not unknown in the area).

Bhimbetka is only 45 km from Bhopal, about 1.5 hours drive. We were on a 5 day roadtrip in Madhya Pradesh and this was our second day of the trip. We started from Indore around 9 in the morning, after a comfortable breakfast, and cruised into Bhopal in 3 hours. The NH3, which connects Indore and Bhopal is in splendid shape and is a beautiful road to drive on.

Our accommodation in Bhopal was the Jehan Numa Palace Hotel, a 120 year old palace built by the Begum rulers of Bhopal, and is deservedly one of the highest rated hotels in Bhopal. We passed through some of Bhopal city on our way to the hotel. Bhopal city is characterized by has two big lakes inside the city – the Upper and the Lower lakes. The city is also in love with Raja Bhoj, who apparently created the Upper lake and founded the city. From the airport to the lake, everything is named after him

A quick lunch at the hotel and we were off to Bhimbetka.

Bhimbetka Rock Shelters, as they are officially called, have confirmed human settlement there dating back 100,000 years (yes it isn’t a typo)
The paintings there date from 15,000 years ago upto more modern medieval times. The paintings are done on faces of rock faces where nature has provided natural shelter. Although the rock art is spread over a ridge for about 40km, only a small section is open for tourists. This section has a big concentration of paintings, including the famous boar painting (the face of Bhimbetka) as well as the wondrous “Zoo Rock”

The earliest paintings (15,000 years old) are done in white and are largely stick figures, like the ones below 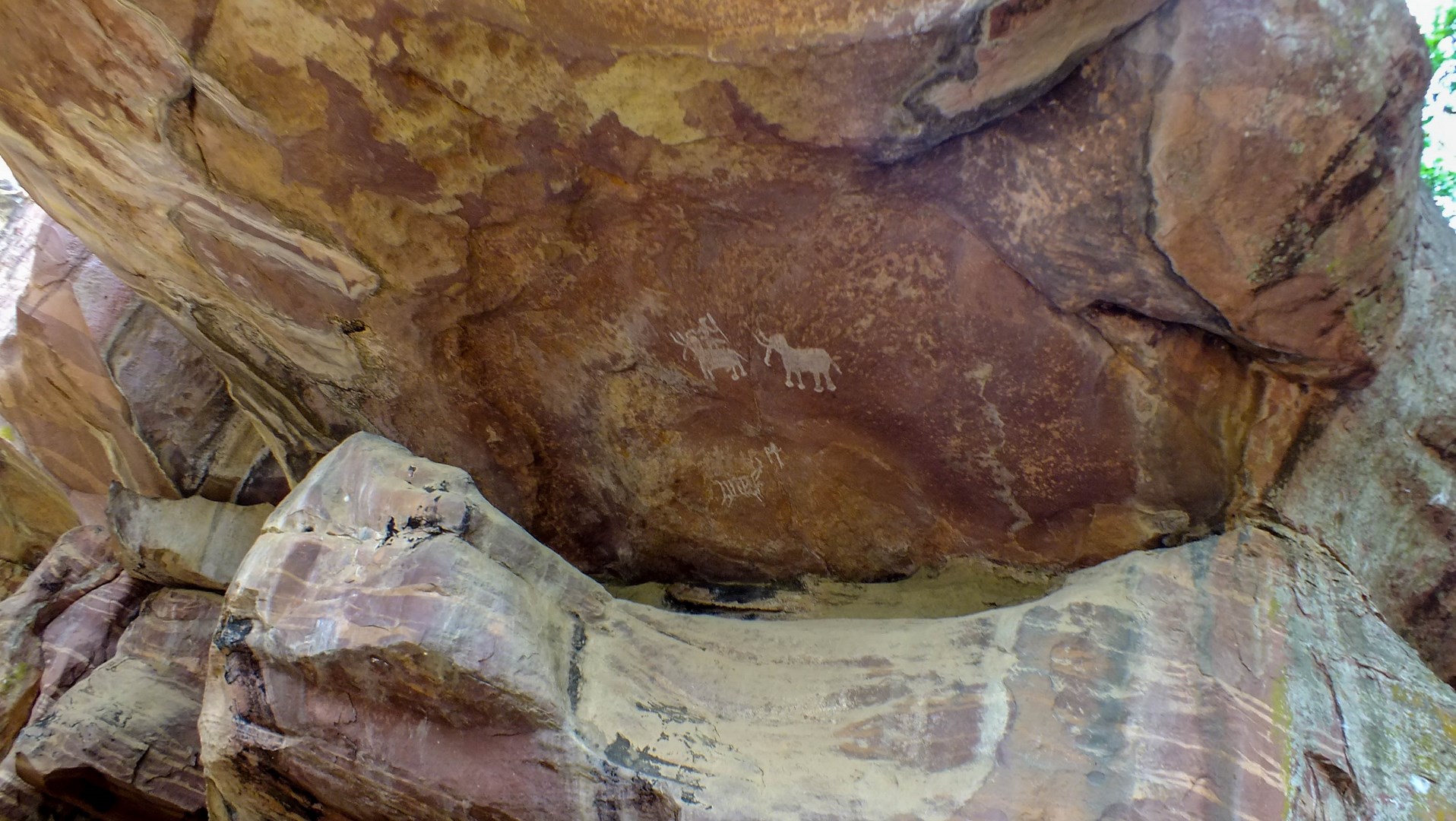 The most common paintings are from iron age, when red from iron oxide became the main pigment. These paintings are mostly of animals or hunting scenes, as is common with most Paleolithic rock art sites around the world. One particular rock, is covered from top to bottom with animal drawings, and has been named the Zoo Rock (below). 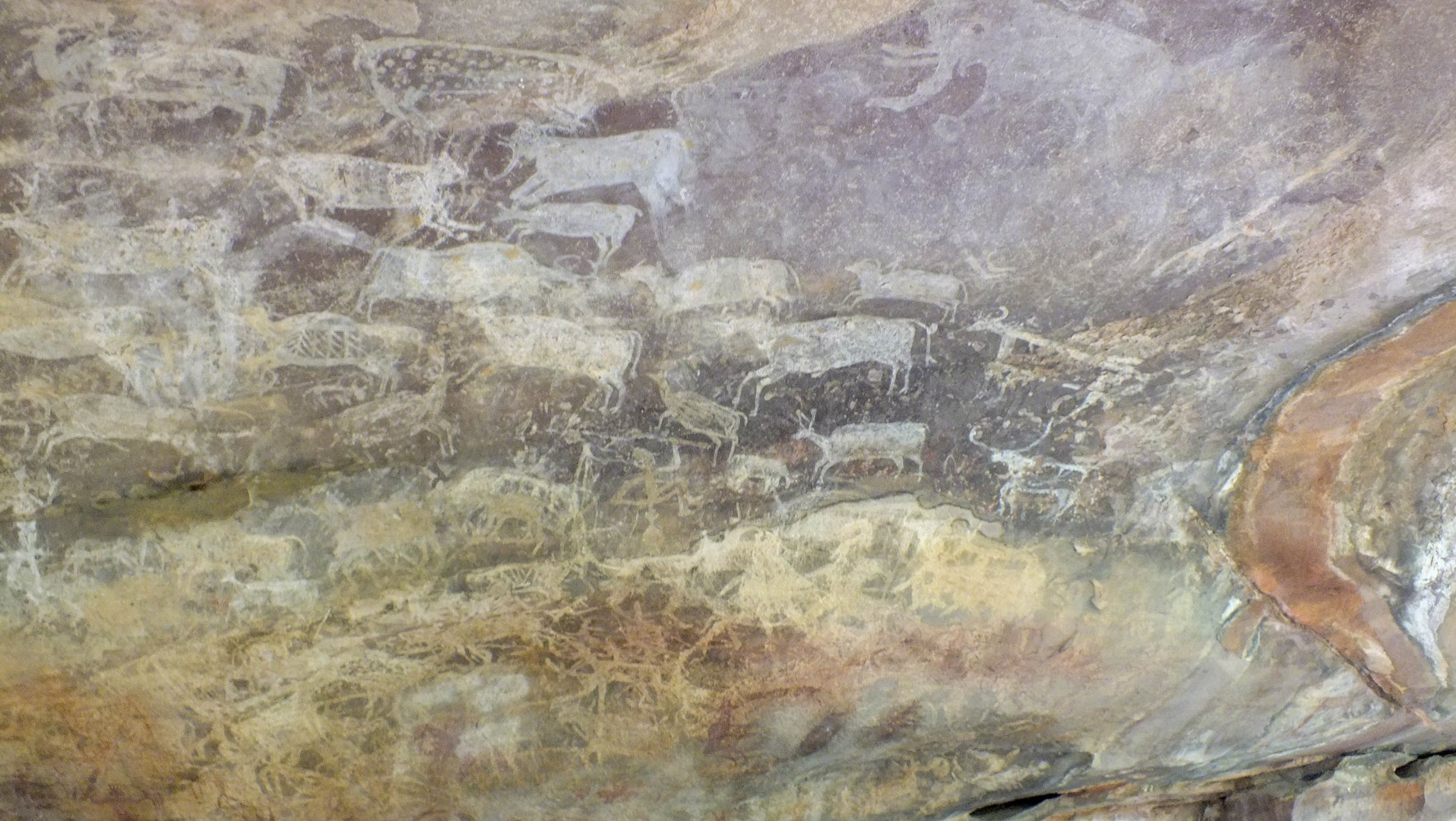 And the most famous painting of Bhimbetka is the Wild Boar (top), where a oversized boar is seen chasing hunters. Most of the paintings, while being simplistic, are astonishingly correct in their animal anatomy 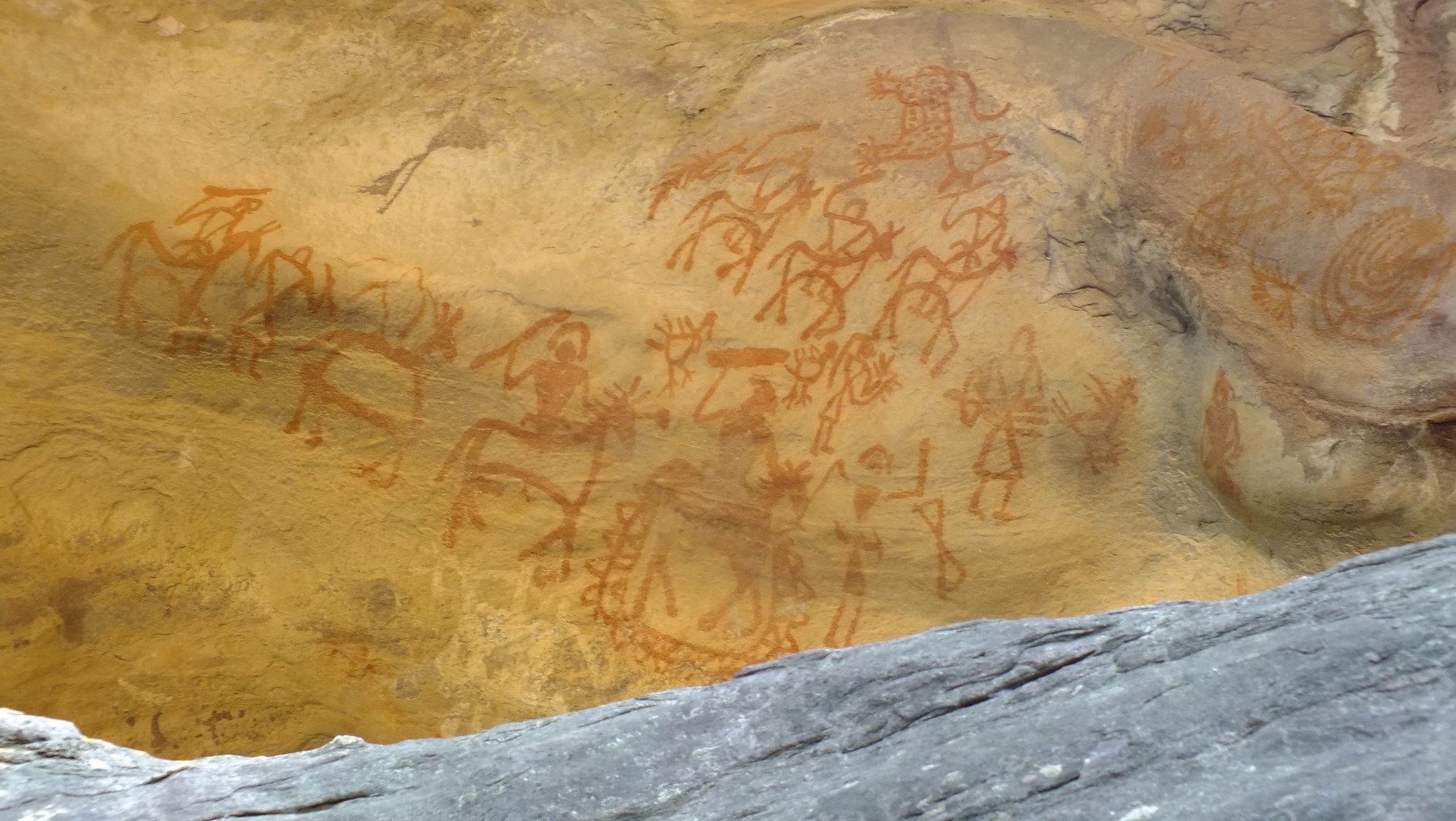 Bhimbetka rock shelters are the oldest expression of culture in india – older than any other historical building you may have heard of or seen. The paintings may seem simple line outlines, but the artists have accurately depicted the animals around them, their daily activities, dance etc. It marks the start of civilization on the Indian subcontinent, as humans moved forward from just surviving. It is amazing something this old has survived thousands of years and that we can have a peek at it