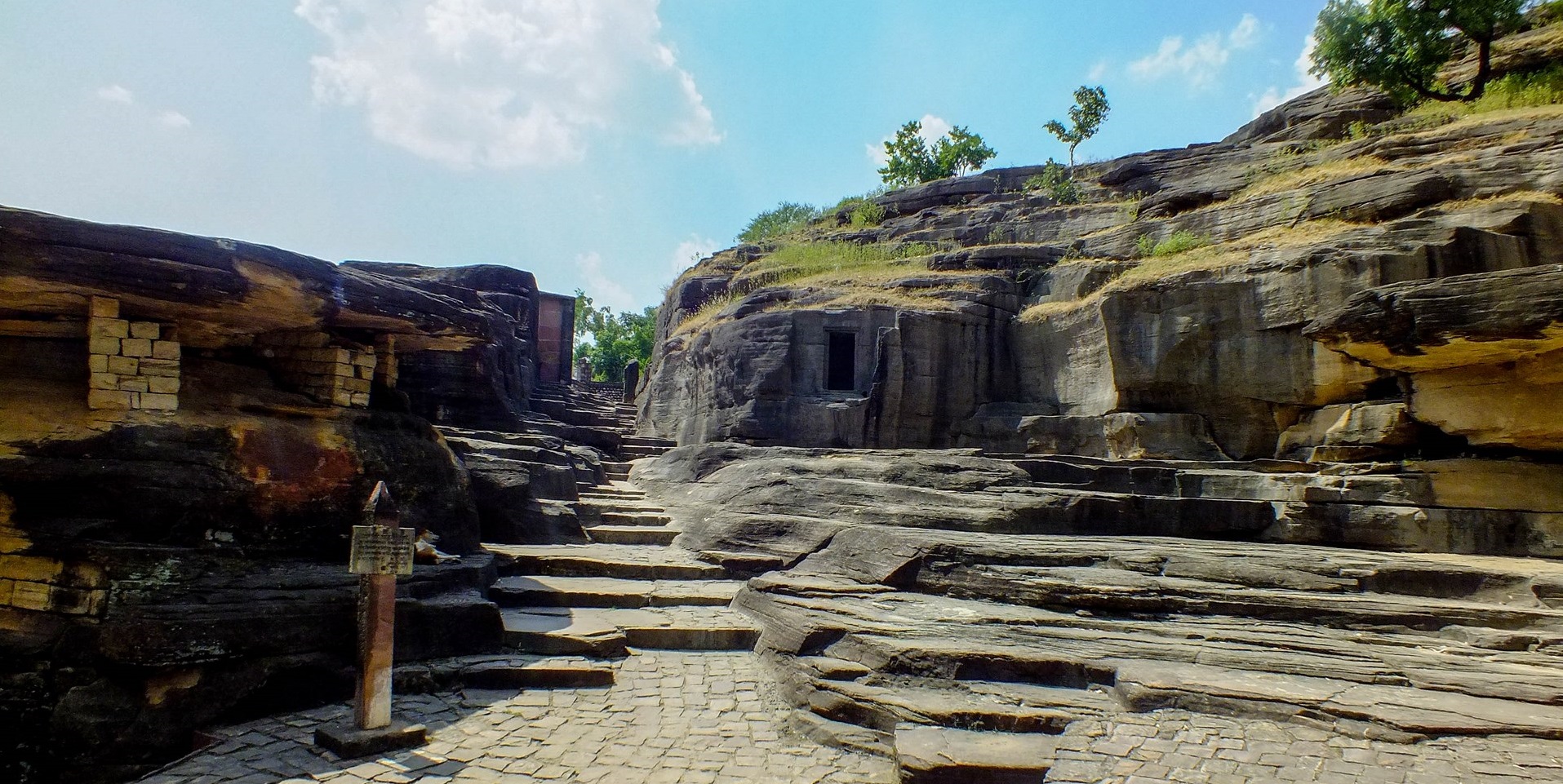 Vidisha is an ancient, but little known town in Central India. In fact the Great Stupa at Sanchi owes it’s existence to Vidisha – as Emperor Ashoka met and married his first wife Devi at Vidisha (she was a merchant’s daughter). Sanchi was one the first stupas built by Ashoka and it’s construction was apparently personally supervised by Devi herself. Vidisha is only 15 km from Sanchi, hence it was a sort of bonus to Sanchi. The target was the Udaygiri caves near Vidisha, one of the oldest cave temples in India, and probably the oldest Hindu cave temple in India. Built around 400 AD by Chandragupta II of Gupta dynasty, it is one of the few surviving examples of Gupta architecture.

However the road to Udayagiri was much more than we bargained for. Google Maps showed a road that skirted Vidisha city, and we were happy to get a chance to avoid the narrow roads of an old city. But that road soon vanished, leaving a dirt track through corn fields, which was fit only for tractors. We coaxed and cajoled our car through it for km after km, hoping that better roads were just a little way away. The car even touched one of the rocks on that road, but thankfully nothing broke. That 13 km took us a full hour to cover. 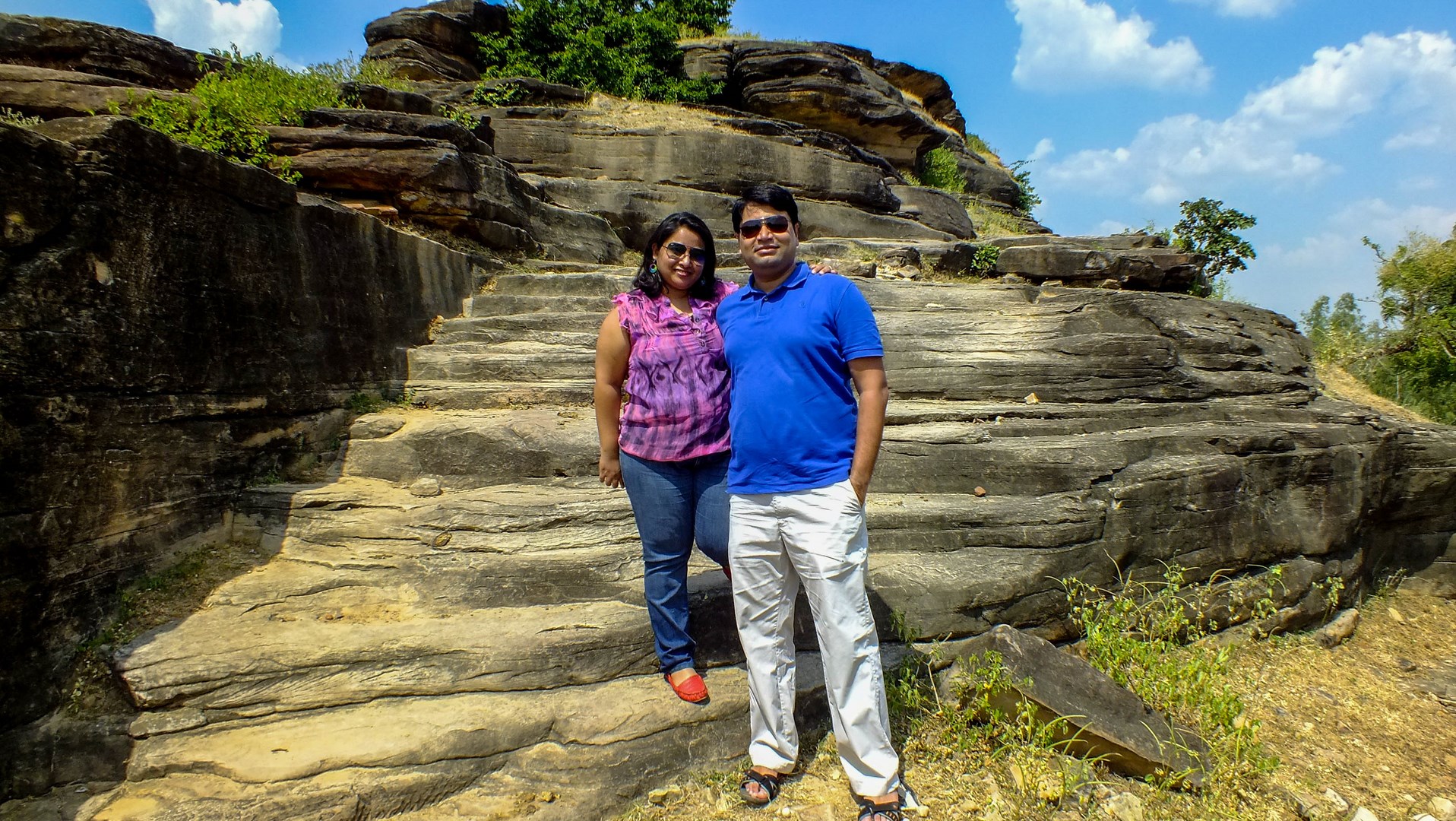 Udayagiri caves predate the Ellora or Badami caves by a few centuries and hence are not as elaborate as them. The caves are carved into a small hill, with most caves being very small rooms with a carved doorway and a deity/shiv linga in the centre of the room. The most iconic carving is the 10 ft high statue of Vishnu’s Varaha avatar in cave number 6 (below). The cave is more an overhang rather than a proper cave, hence the wall carving is very well lit. The wall features a huge Varaha slaying a demon and rescuing Bhudevi, who is sitting on his shoulder. The background has lot of miniature devas standing in obeisance.

(There is a small Ganesha sculpture in one corner of the cave. It is supposed to the oldest image of Ganesha in the world)

The other notable sculpture is a sleeping Narayana in Cave no 13 (above). However a grill has been installed in a very ugly fashion, blocking access to the sculpture. Similar iron gates have been installed in a lot of smaller caves and are kept locked, making viewing or taking photos impossible. Notable casualty of this is a wonderful shiv linga in Cave no 4, where the face of Shiva is carved into the shiv linga.

There is a clear trail up the hill where, where there is evidence of a lot of other structures. However they were made of wood, and none of it survived except grooves on the stone floors and lots of stone steps. Up at the top of the hill is a ruined temple from the Gupta age – but it is essentially just an overgrown-with-weeds stone platform. Plus that temple is accessed via a steep climb of stairs and on a hot October afternoon, it did not feel worth it at all ! There are a few other caves on the other side of the hill, accessed by a different gate, about a km from the main caves. Nothing very special though)