When we first drove through Bandhavgarh National Park, all we saw were the godawful roads inside the sanctuary. It was a neverending series of potholes which even backward Africans would refuse to acknowledge as a road. At 9 pm in the night, after 2 hours of traveling in the car from Katni station over Madhya Pradesh’s not-so-good roads, immediately after a 21 hour train journey from Mumbai, we were at the end of our lines – just hoping the journey would get over soon. However the road conditions ensured that the last 15km stretch took us an hour to finish.

Only once we reached Tala gate and found our surprisingly plush resort that we heaved a sigh of relief and attacked the homely food with gusto. January in Central India is quite cold and the entire place was covered in mist. However, our cottages were equipped with serious-looking room heaters and the warm service of the staff of Tiger Den Resort soon made us at ease. After the meal, the smiles were back on our faces and we retired early to get up in time for our first tiger safari

We were two couples on this trip – us and Suchi’s cousin Shruthi and her husband Amit. The plan had been hatched a longtime back – in December, when Suchitra had realized Republic day was a possible 4-day-weekend. We had always wanted to visit Khajuraho and Bandhavgarh being only 220 odd km away became the automatic second destination. The fact that it has the highest density of tigers per sq km among national parks was definitely helpful in finalizing the itinerary. Flight connections to MP from Bombay aren’t the best and so it had to be trains. But even in mid-December, we barely got the last 4 tickets in 3AC for our onward journey on 25th Jan. 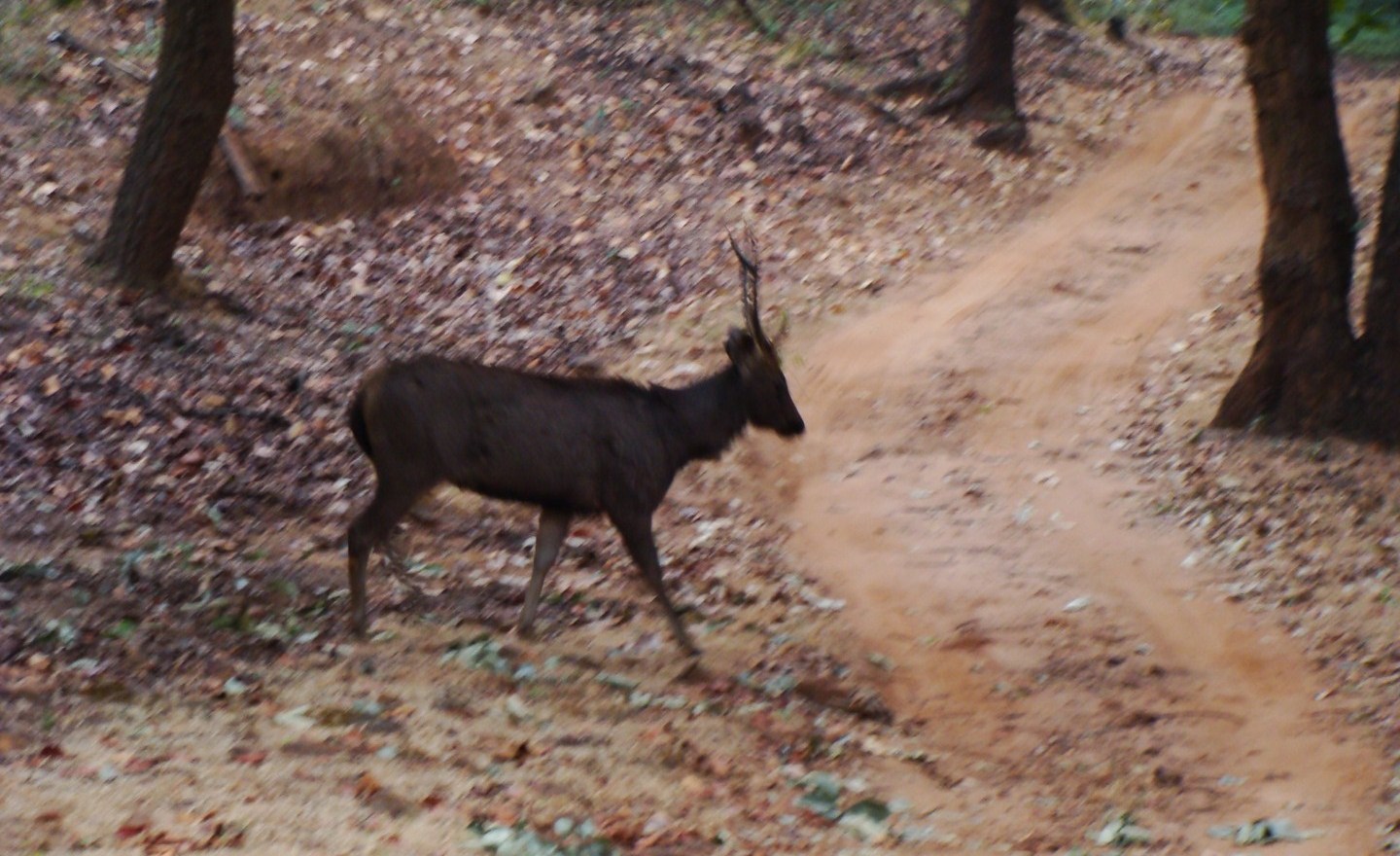 There are only a limited number of jeeps allowed at a time inside Bandhavgarh National Park, so you have to book a jeep safari much before you land in Bandhavgarh – preferably at the time of your hotel booking itself. That morning at 6am, we were lined up at the gate of the resort along with similar jeeps from different resorts, waiting for the opening of the park. There are 4 different routes inside the park marked A B C and D – we were on the A route that day. At 6 in the morning, the ground was still covered with the grey fog, the sun wasn’t up and visibility was quite limited. For the first 1.5 hours of the safari, we huddled in cold in the open jeep as we tried in to spot something – anything. But the forest was very silent and it looked like the animals too were waiting for the sun to appear.

Midway into the safari, we halted at the stopover point. It is a Forest Dept halt with loos and couple of vendors selling tea and hot pakoras. Oh the joy of warming our frozen fingers by holding cups of warm tea and munching hot pakoras ! All the jeeps make a stop here and soon the demand for pakoras and tea outnumbered the sellers’ capabilities – and there was a huge waiting for them. Meanwhile having downed two teas each and two plates of pakoras each, we finally felt a little revived and indulged in some photography before starting for the second half of the trip 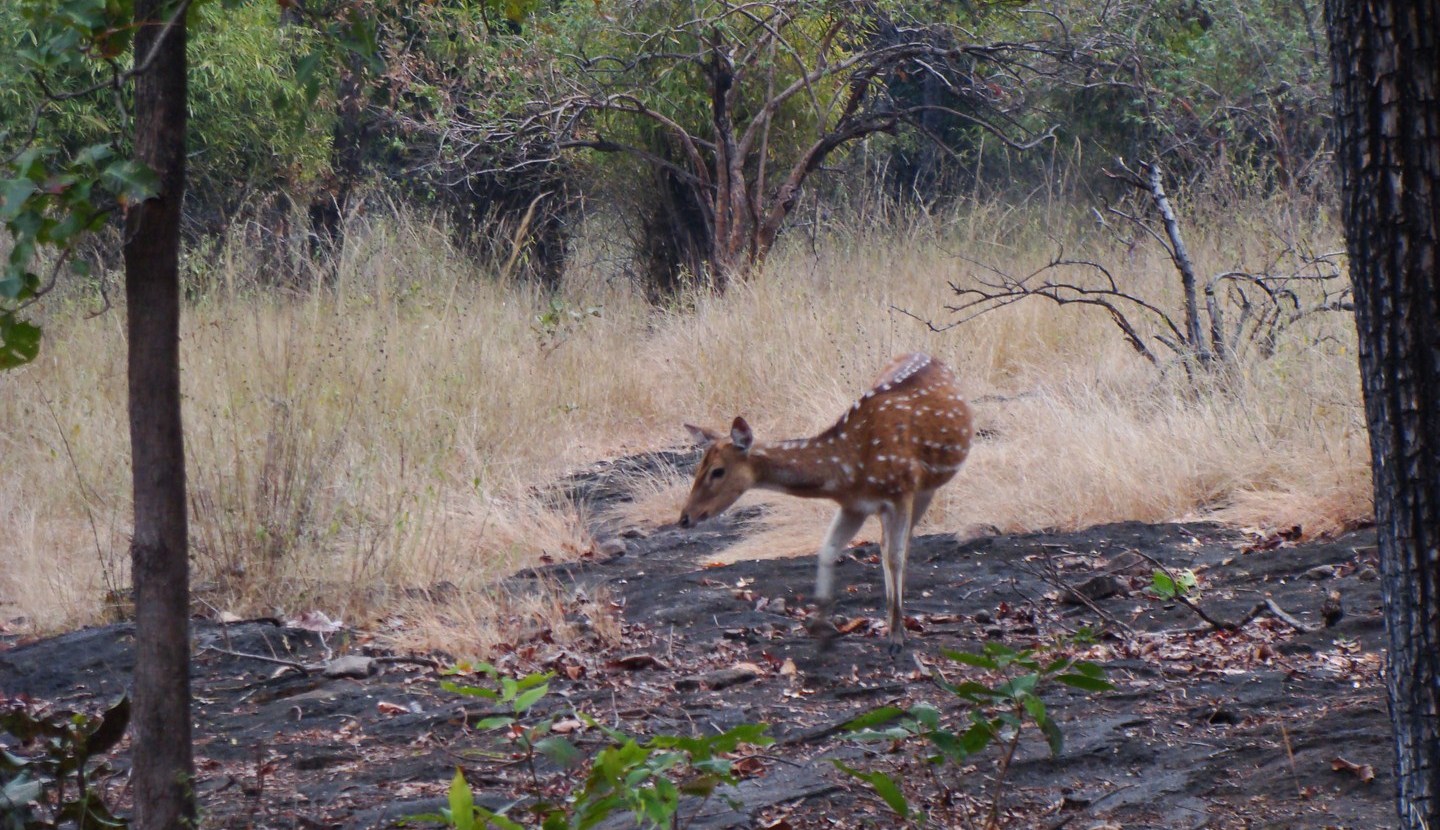 By this time, the sun had crept up the horizon and the mist had cleared up. Suddenly the forest had woken to life. There were monkeys on the trees (and on the ground), birds twittering and lots and lots of chital to be seen, along with the occasional sambar deer. But alas, no tiger. We spotted the usual pug marks on the trail at one place, but I guess that’s the only thing most visitors to tiger reserves come back with. However, not all were that unlucky. One of the jeeps on the C route had been lucky – and they made a rather big deal about their tiger viewing

By the time we finished our morning safari, it was almost 10 and the sun was a little more assertive. On stationary ground, the temperature was just perfect – and the hotel had breakfast waiting for us. Breakfast was just as good as last night’s dinner buffet and the aloo parathas were packed off with gusto. Since waking up at 5 in the morning on a holiday is just not done, we compensated by taking a mid morning nap. After a light lunch, it was time for the afternoon safari at 2pm

We again lined up in a queue at the gate of the sanctuary – and this time we had some serious photographers with metre-long lenses for company in other jeeps. Since the tiger had been sighted on the C route in the morning, we got ourselves signed up for the C route. And the C route definitely had more animals than the morning A – we saw more chitals, sambar, peacocks – and once thought we were close to a leopard too, but the forest guide couldn’t be sure. However, our bad luck with the tiger continued – a couple of jeeps behind us on the C route happened to see the tiger walk, across the road 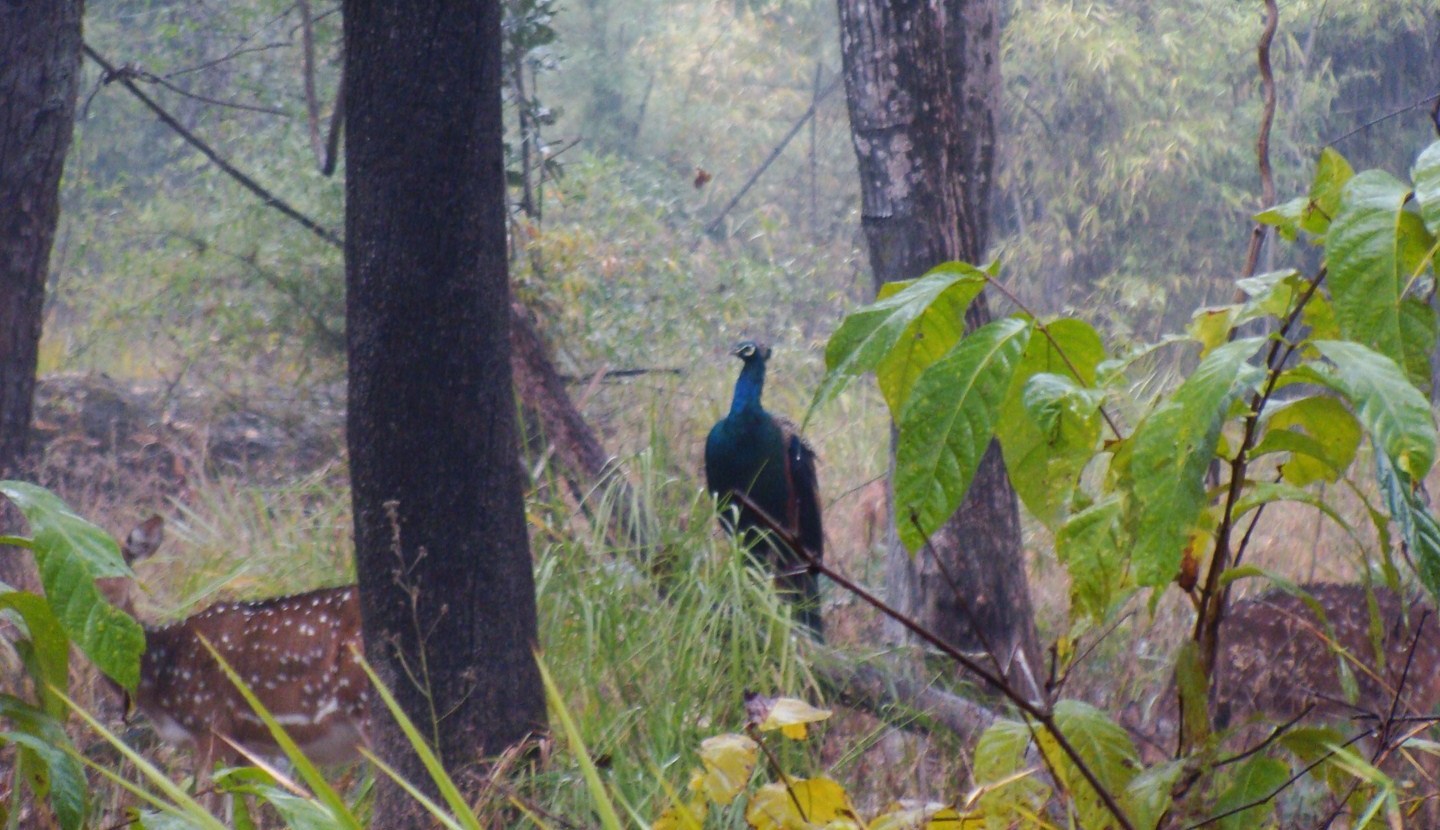 Our driver, quite a spirited fellow, took a U turn and raced back rally style to the spot where the sighting had occurred, but we were too late. The tiger was apparently on its way to a watering hole and the forest guide opined that he would come back the same way, and he would cross the road again. We picked a spot on the trail and waited – hoping the tiger would take the same route but it wasn’t to be. And so we came back empty handed again

However, we had the foresight to make contingency plans in the afternoon for such a disappointment. The ever-ready-to-please staff had been instructed to light a bonfire for us under the gazebo and a waiter was left to keep bringing piping hot snacks for us – for it had again become very cold and misty. The warm fire, the delicious chicken and paneer tikkas and fiery spirits made it a memorable evening in Bandhavgarh

We took the Rajendra Nagar express from Mumbai which departs from LTT at 10.30pm. It reaches Katni at 5.30 pm in the evening, from where you can take a taxi (pre-arranged) for the 100 km to Bandhavgarh. The roads in Madhya Pradesh are not that good and it seems no one in the state has heard of dual carriageways – everything is strictly 2-lane. Katni itself is a typical Indian small town and it isn’t necessarily the best idea to spend a night there. The road from Katni to Tala gate in Bandhavgarh, passes through a bit of the northern part of the Bandhavgarh sanctuary – which is where we were on the first night at 9pm.

There are a lot of options of staying at Tala for all kinds of budgets. However, we cannot recommend Tiger Den Resort (http://www.tigerdenbandhavgarh.com/) enough. Apart from the fantastic rooms – the bathroom in our cottage was as large as the bedroom in my Bombay apartment – the service-with-a-smile was the best I have personally experienced in my traveling life. It cost us Rs 4500 per night for a cottage – inclusive of all meals 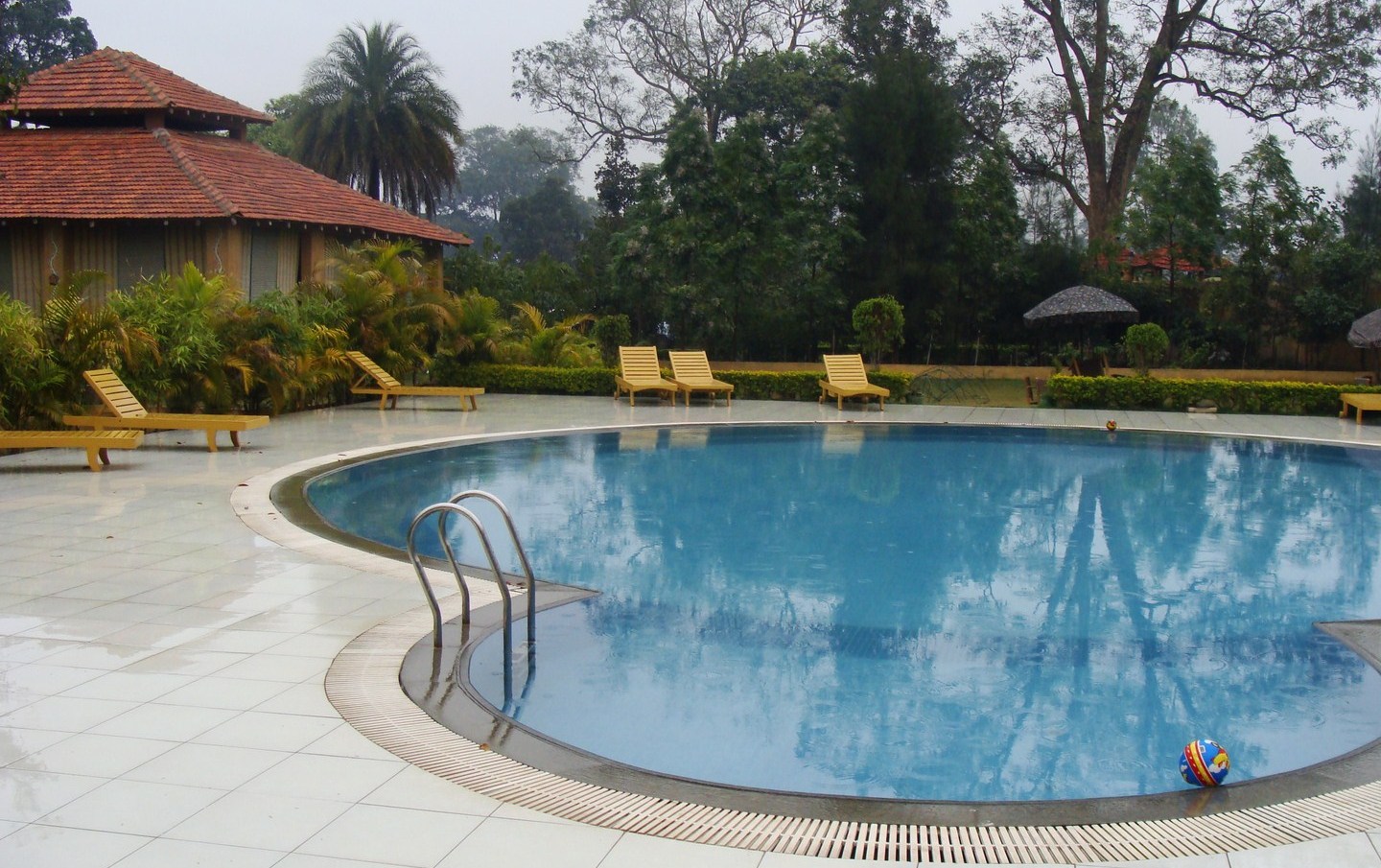