We did a Bandhavgarh National Park + Khajuraho trip over the Republic day weekend. The travelog for Bandhavgarh can be found here

After another hearty breakfast, we bid adieu to the Tiger Den resort at Bandhavgarh and started for Khajuraho (230 km away) at about 8 am. We figured we should reach Khajuraho by 12.30 pm – accounting for the not-so-fast MP highways. What we didn’t account for was the difference in standards of service between the Shining India (Bombay/Delhi/Bangalore) and the interior of India. Our only black mark on the trip was our driver. He just couldn’t wait to solve some crisis back home in Jabalpur, and he would be on the phone every 15 min for the first 2 hours of the trip – and keep searching for mobile signal on his cell phone the rest of time (because we were in a forest area) – all the while driving.

Finally we had to call the travel agency from whom we had booked this vehicle, who scolded the driver, and he seemed to settle down for the drive. However, his domestic problem reappeared couple of hours later and he was again calling up all and sundry, least bothered about the delay he was causing to us. After another call to the agency and another scolding, we finally reached Khajuraho almost at 2pm, 6 hours after we started 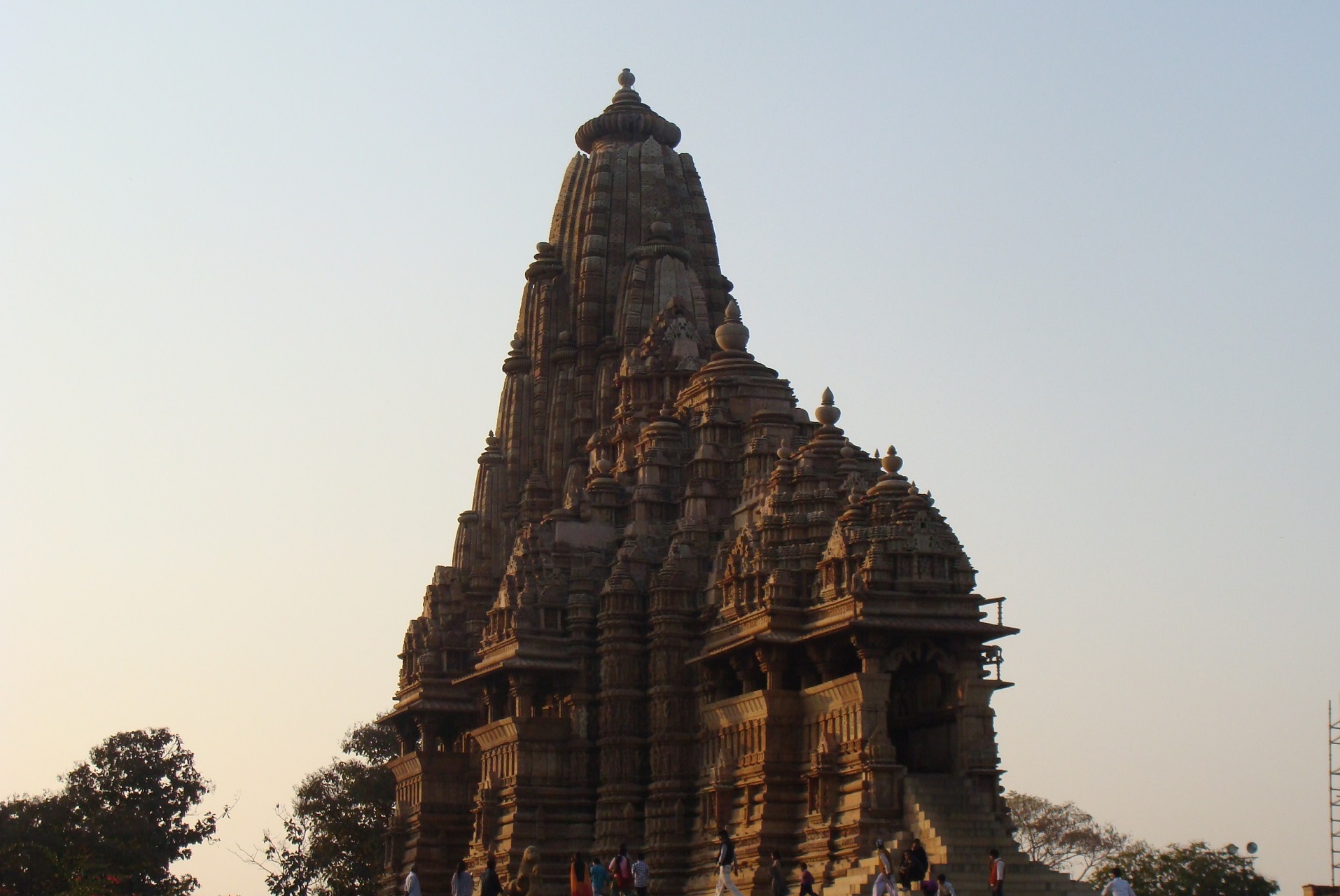 Overlooked by the majority of us Indians because of its erotica infamy (imagine looking at such taboo stuff with full family!), the temples at Khajuraho stand right up on the top of Indian temple architecture on the basis of the quality of sculpture – where craftsmen have breathed life into stone. While Khajuraho is always mentioned in the same breath as the Kamasutra, it is doing the rest 90% of the sculptures a big disservice. Yes, the erotic sculptures hardly make up 10% of the total figurines, but the remaining apsaras, sundaris, gods and devas have been carved with such grace and elegance, in my view, it is unparalleled in Indian subcontinent

After checking into our delightful hotel and a lunch set in a sunny garden, we started our exploration of Khajuraho temples. The town of Khajuraho (it barely qualifies to be one) is so small that it can be crossed on foot in 10 min. Our hotel was situated exactly 2 min walking distance from the Western Group of Temples. The temples at Khajuraho are split into 3 groups – the Western, the Eastern the Southern Group. The skill of the Chandelas (builders of Khajuraho) reached its zenith at the Western Group, where the temples are the biggest and the most ornate. The Western Group temples are bunched together tightly, which has helped in their conservation as the ASI has put up a protective fence around the group and have landscaped the grounds. 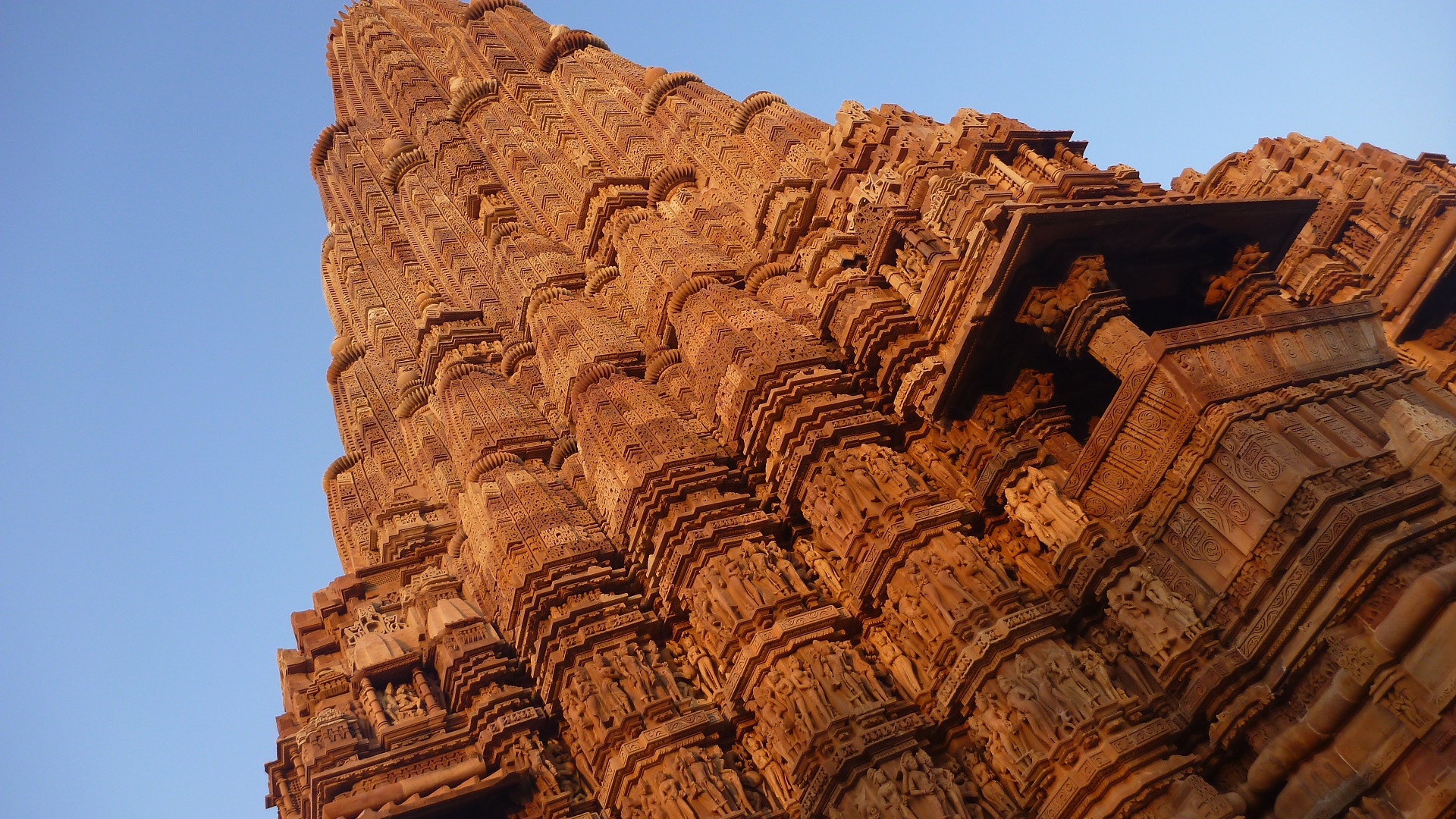 But because the audio guides talked only about few pre-defined topics, we finished the tour of the Western Group of temples rather quickly. Among them, only the Chitragupta temple was undergoing renovation on the back 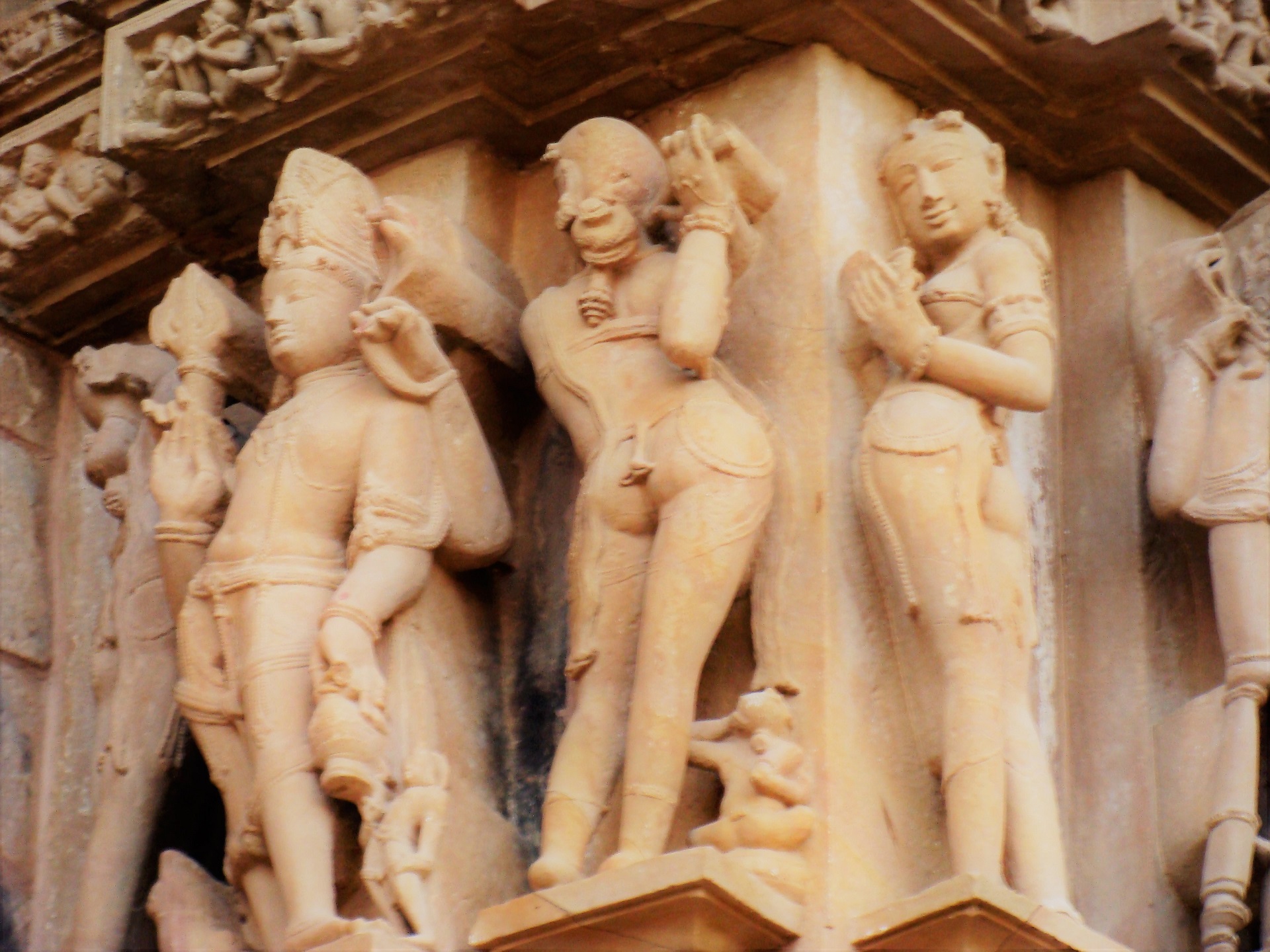 We got tickets for the Sound and Light show held on the Western Group premises for Rs 80 each, but the show itself was very disappointing. Needlessly long and with a very amateurish script – a definite avoid.

The next day we headed for the Eastern Group of temples first. The Eastern Group has two Jain temples which are worth seeing – the Parsvnath temple and the Adinath temple – dedicated to different Tirthankaras of Jainism. The curiosity of these temples is that although they have Jain tirthankaras inside, the outside walls of the temples are very similar to the other Khajuraho temples with Hindu gods and goddesses etc – interspersed with some sculptures of Mahavir Jain and the other tirthankaras. Legend has it that one minister of the Chandelas was a Jain and he pleaded with the King to make one temple for his religion as well – and the King obliged

The other temples in the Eastern Group are the Vaman , the Brahma and the Javeri temples. The Brahma temple is one of the oldest temples in Khajuraho – it is much smaller than the other temples and is built with granite instead of the usual sandstone. However it kept closed to the public now. The Vamana temple is a little ways ahead of the Brahma temple, set amidst green fields, is a slightly variation on the Khajuraho style with squarish ardha mandapa. The Javeri temple we skipped. 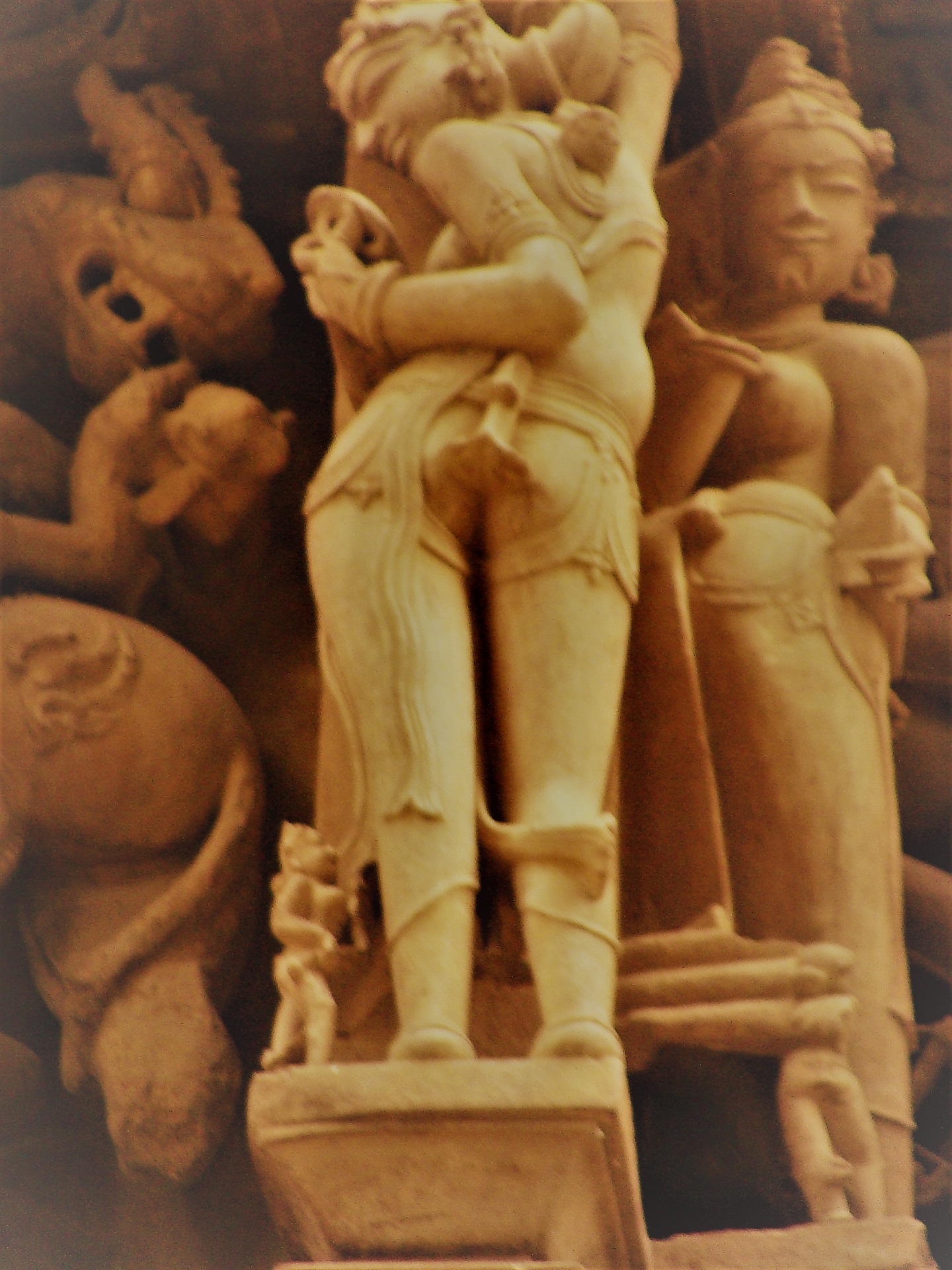 The Southern Group of temples are even more outside the town. The most impressive amongst them is the Dulhadeo temple, which gets a huge garden around it all to itself. The Dulhadeo temple qualifies to be called the naughty temple as its walls, on first glance, are all from mythology and kosher. But the vertical grooves all along the side and back of the temple have erotica carved into their sides – completely invisible at normal glance. Only visible if you are looking for it

The Chaturbhuj temple was the furthest of the lot and it is the only one which does not have ANY erotica on its walls. The deity inside however, was very interesting as the face of the statue (of Vishnu) resembles the famous Bodhisattva painting from the Ajanta caves. 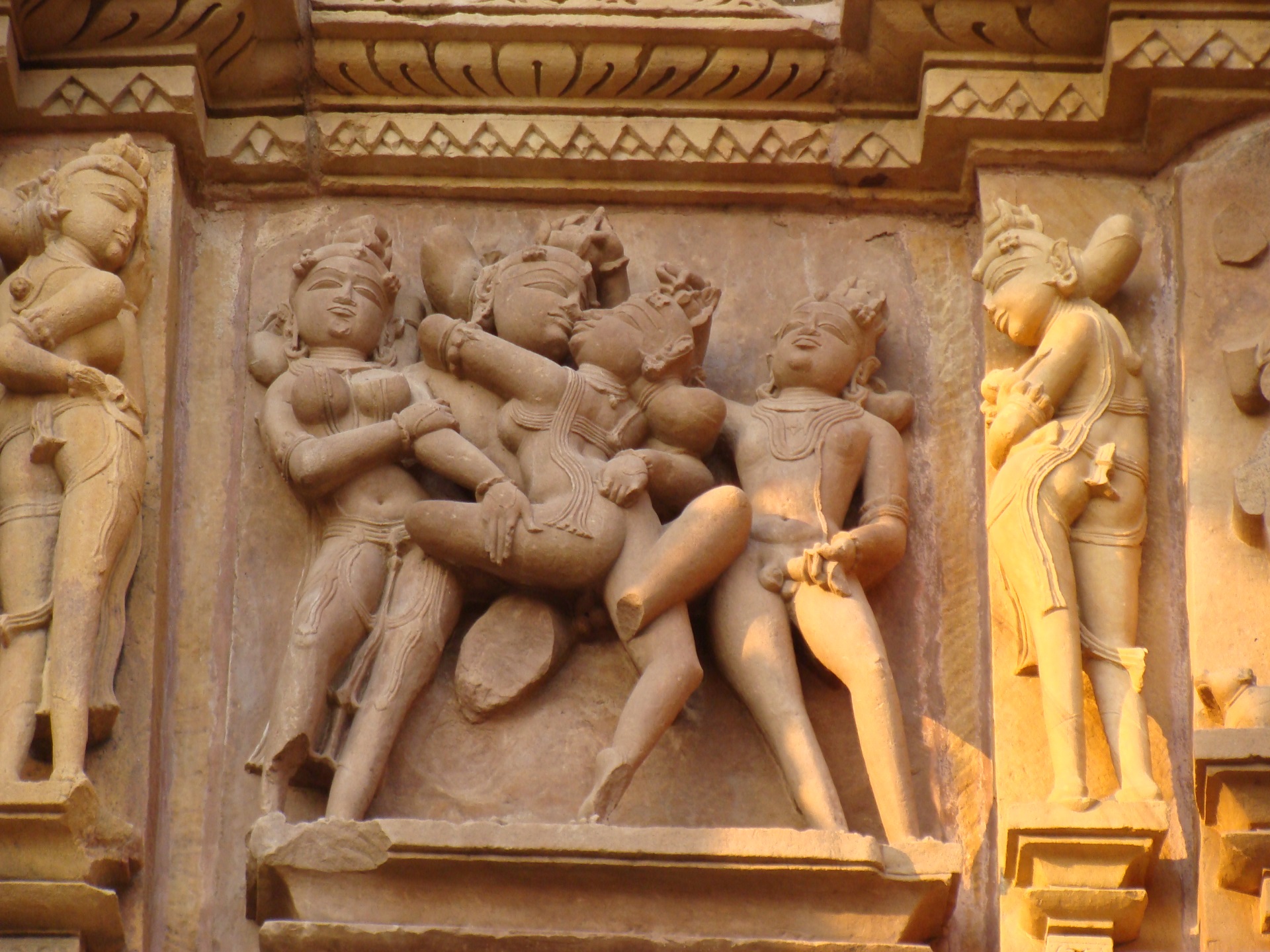 The sculptors have also put erotica in hidden locations in miniature form where you wouldnt catch it on first glance unless, you have someone like a guide who can point them to you. The Lakshmana temple is the perfect place to play this game, as there are small figurines carved inside the temple too (most of the Khajuraho temples limit erotica to the outer walls).

And so, with a more detailed viewing of the western group of temples, our trip of Khajuraho ended. 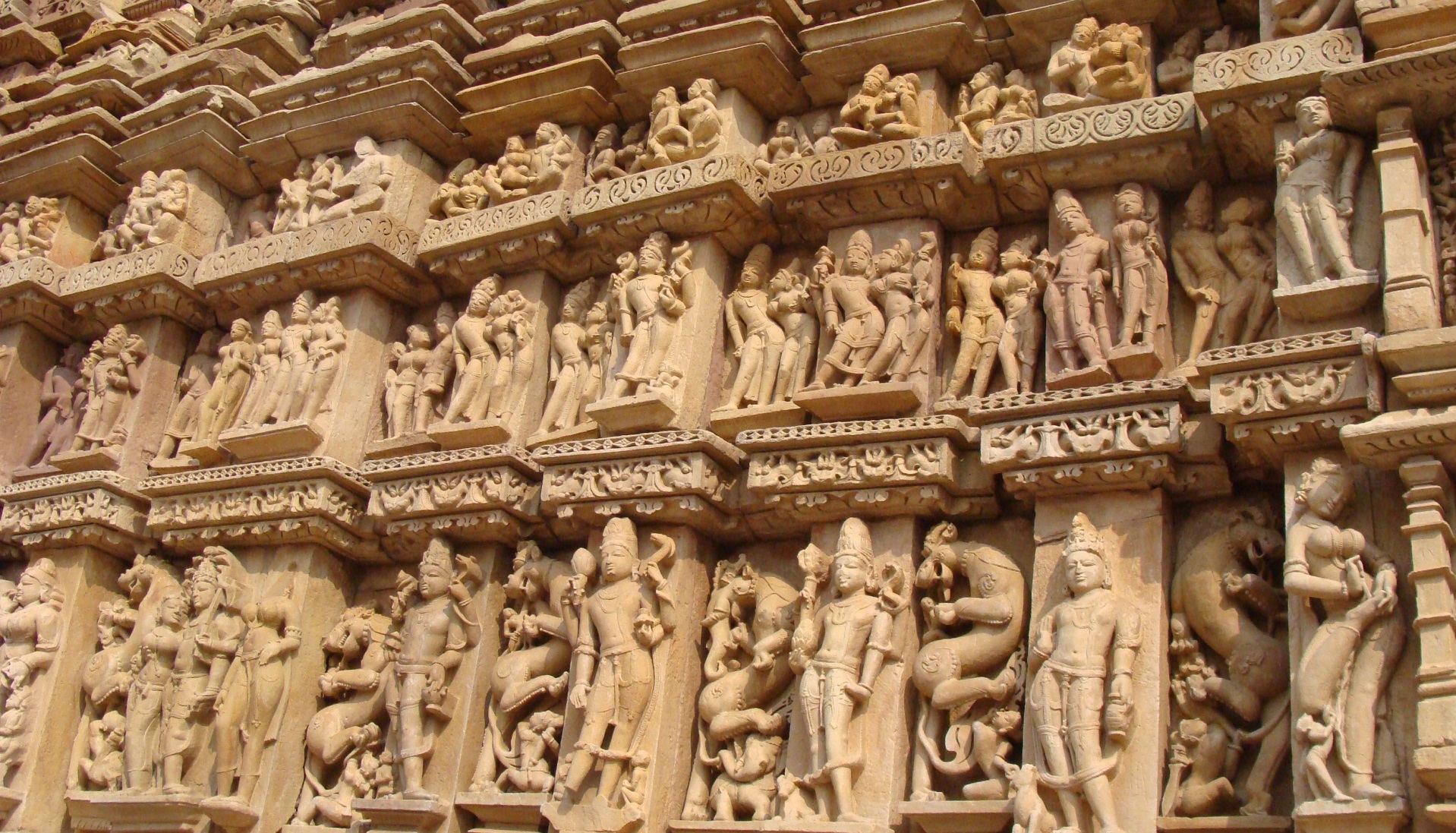 A word about the guides. The guides are to be found only outside the Western Group. A detailed showing of the whole Western Group can easily take 5 hours – we had done it once with the audio guide and it still took us almost 3 hours with the regular guide. Hence the guides are a wee bit more expensive than other Indian locations – you should expect to fork out about Rs 500 for the guide. And from his point of view, with 5 hours of speaking, he might just be getting one gig per day You can engage a guide to take you to the Eastern and Southern temples too, but we have no clue what would be his charges – and whether it is worth it, as the Eastern and Southern Group of temples are somewhat poor cousins of the Western group in both size and sculpture.

True to its reputation, we did not see any Indian families as tourists in Khajuraho. It was almost completely overrun by foreigners – we were probably the only Indians in our entire hotel. Given this skew in visitors, food options are overwhelmingly western. Almost all of the restaurants advertise wood-fired-pizzas, or pastas and the likes. So if you aren’t averse to western cuisine, you’d have a good time there. Basic north Indian food is also available, of course
(and as is the wont of Bengali tourists, there is a Dada Boudi hotel in Khajuraho as well)

For accommodation, there are quite a few 5-star chains there if you are so inclined– the Taj, the Oberoi, Radisson and couple of other famous names. But if you don’t want to spend so much, Hotel Surya in the main market, near the entrance of Western Group of temples is highly recommended. While it has a very small and non-descript exterior, the interiors of the hotel enclose a very big, nicely done garden (including the garden restaurant) and is overall very pleasant. The room rates are in keeping with the exteriors, Rs 1200 gets you AC rooms (with TV and all) – and the staff are very helpful. The food is all veg, but the place was crawling with foreigners – we were the only Indians in the hotel

After a hearty lunch following the nearly 3-hour Western Group walk, we rested for a couple of hours before starting back for home. This being Madhya Pradesh, the return journey also involved going to another town by road before catching the train back home. This time the destination was Satna, about 110 km from Khajuraho. We started at around 5pm because our driver had to proceed to Jabalpur after dropping us at Satna (the car was from Jabalpur, which was again a couple of hours from Satna) – and he didn’t want to drive on MP roads at night.

Given our driver’s reluctance to drive on MP roads at night, we figured it was wiser to reach with time in hand and we started back from Khajuraho by 5 pm, although our train was at 10pm, We reached Satna in 3 hours and only at Satna railway station did we discover that the train was a couple of hours late. The eating options at Satna station weren’t the best and since we had 4 hours to kill, we checked in our luggage at the Railway Cloakroom, and took a autorickshaw to Hotel Bharhut (which google suggested was the only decent “premium” hotel in the area)

It did look ok from the outside, so we ventured inside, only to find the dining area completely empty – except for 2 bored looking waiters. After some deliberations, we decided that food here couldn’t be worse than the railway station – and it was one of the best decisions of the trip. If you ever decide to repeat our travel plan (or just passing through Satna), definitely sample the tangdi kebab at Hotel Bharhut ! Mindblowingly spicy, will make tears stream down your eyes, yet we just couldn’t stop eating it – so fabulous the texture and masala was.
Rest of the food (north Indian, of course) was equally tasty – all 4 of us ate like pigs – and remember it as one of THE meals of our lives (Also, only the ‘family’ dining part was empty. Adjoining to it was the bar area – with a separate outside entry – which was overflowing with middle aged men noisily consuming alcohol and singing along hindi chartbusters)

After the gluttonous meal at Hotel Bharhut, we retreated back to the railway station waiting room where after a couple of hours (at almost 3am), the train chugged in and took us with it back to Bombay 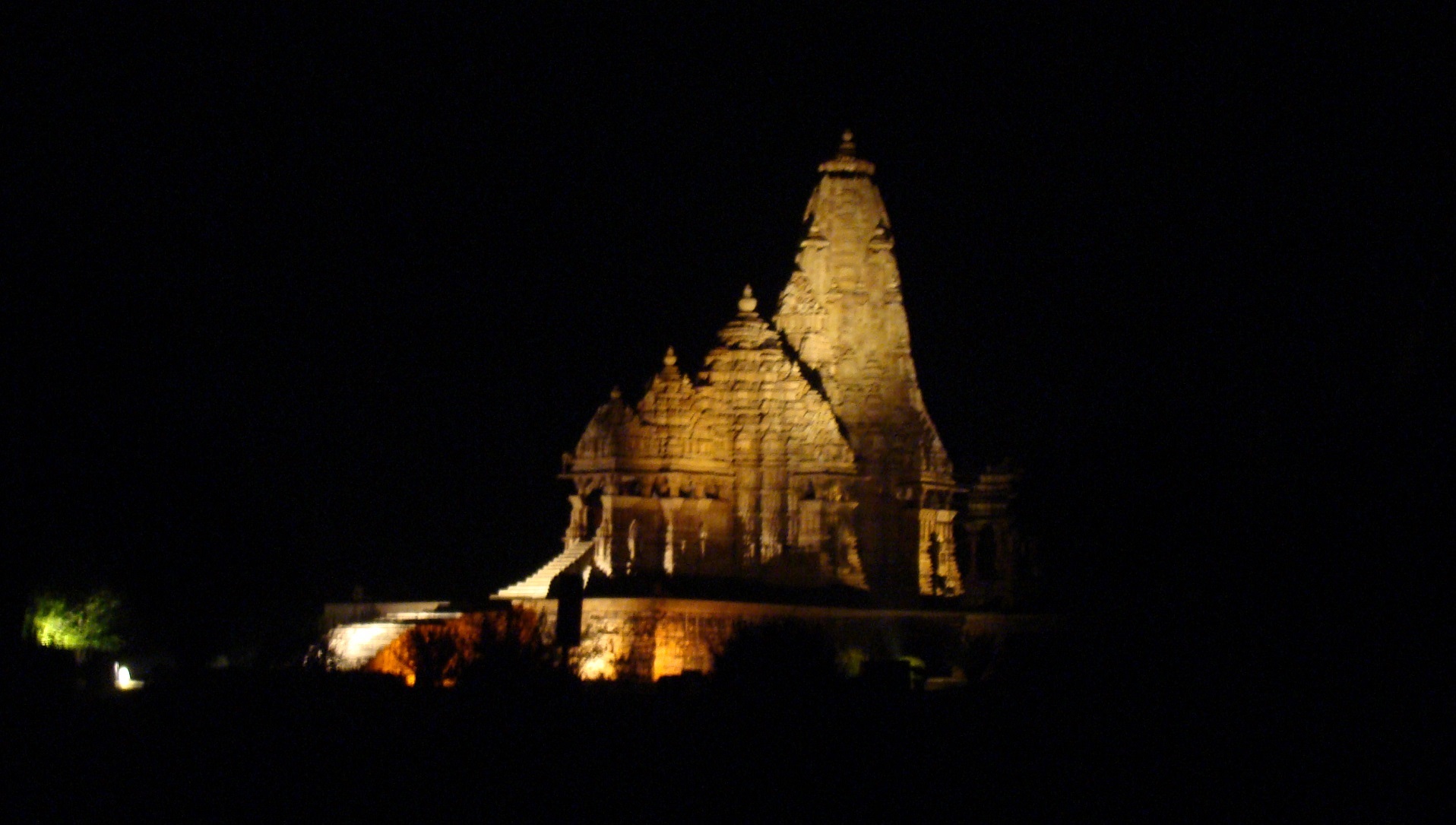