This year’s monsoon had a false start in June when we had gone to Ark Wellness Retreat – when the initial few days of rains fizzled out and the sky remained cloudy but never burst open. There was a long wait for rains to arrive and the downpour finally started only in the second week of July in Mumbai. And this time the rains haven’t stopped yet, bringing smiles to our faces when we are safely ensconced in our homes or offices. From my window seat in office, I always stare at the torrential rains outside, longing to be in my car instead, driving.

So I was definitely hoping for a fully wet Sunday when we made plans to visit Vihigaon Falls. And I got my wish fulfilled as the rains were torrential when we left Bombay. The downpour stopped when we were at our destination and then again started in an almighty fashion on our way back. Driving in heavy rain, sitting cozily inside the car, music playing, is one of the most indescribably pleasurable things I have recently discovered

Our destination, Vihigaon, is in Jawhar district, but it very close to Igatpuri actually, just 10-15 km away. The easiest way to reach Vihigaon is to take the NH3 towards Nashik. At the Kasara ghat, where the road becomes one way and starts climbing up the ghats, there is a small exit to the left about midway up the climb. That turnoff goes towards Jawahar Phata and is clearly marked on Google Maps. Vihigaon is barely 5 km away. And if you don’t take Jawhar Phata exit, Igatpuri is just another 5-6 km more on NH3
(there is alternative route from Bhiwandi via Wada, but the road is narrow two lane and much longer than the six lane NH3)

We were 4 of us on this trip – two couples. Once everyone was picked up from home, and we cleared the second toll after Thane, NH3 unfolded in all its glory. After the week-long heavy rains, the resultant potholes were a bit scary as they were all axle-breaking size (or bigger). But thankfully the potholes were usually spottable from a distance and we did not run into any pothole on NH3 (we hit one inside Bombay on our way back though !)

Breakfast was at Udipi Restaurant, where we stopped because we got tired looking out for our usual Vitthal Kamath. Food was surprisingly nice there – everyone had their favourite combination of hot vadas, dosas and uttapams. Vitthal Kamath turned out to be much ahead, and there is a KFC alongside it now

The initial part of NH3, till Shahapur is not wide enough. Plus there is lot of goods traffic, meaning going is not very fast. But once past these towns, traffic spreads out, the road widens and the potholes become fewer – and you can start doing triple digit speeds. By the time we hit the ghat, rains had stopped. As the ghat climb starts, the railway track comes together with the road, briefly bring memories of “Mere Sapno Ki Rani”, before disappearing into a tunnel. The Jawahar Phata exit is very distinct and we had no trouble spotting it. 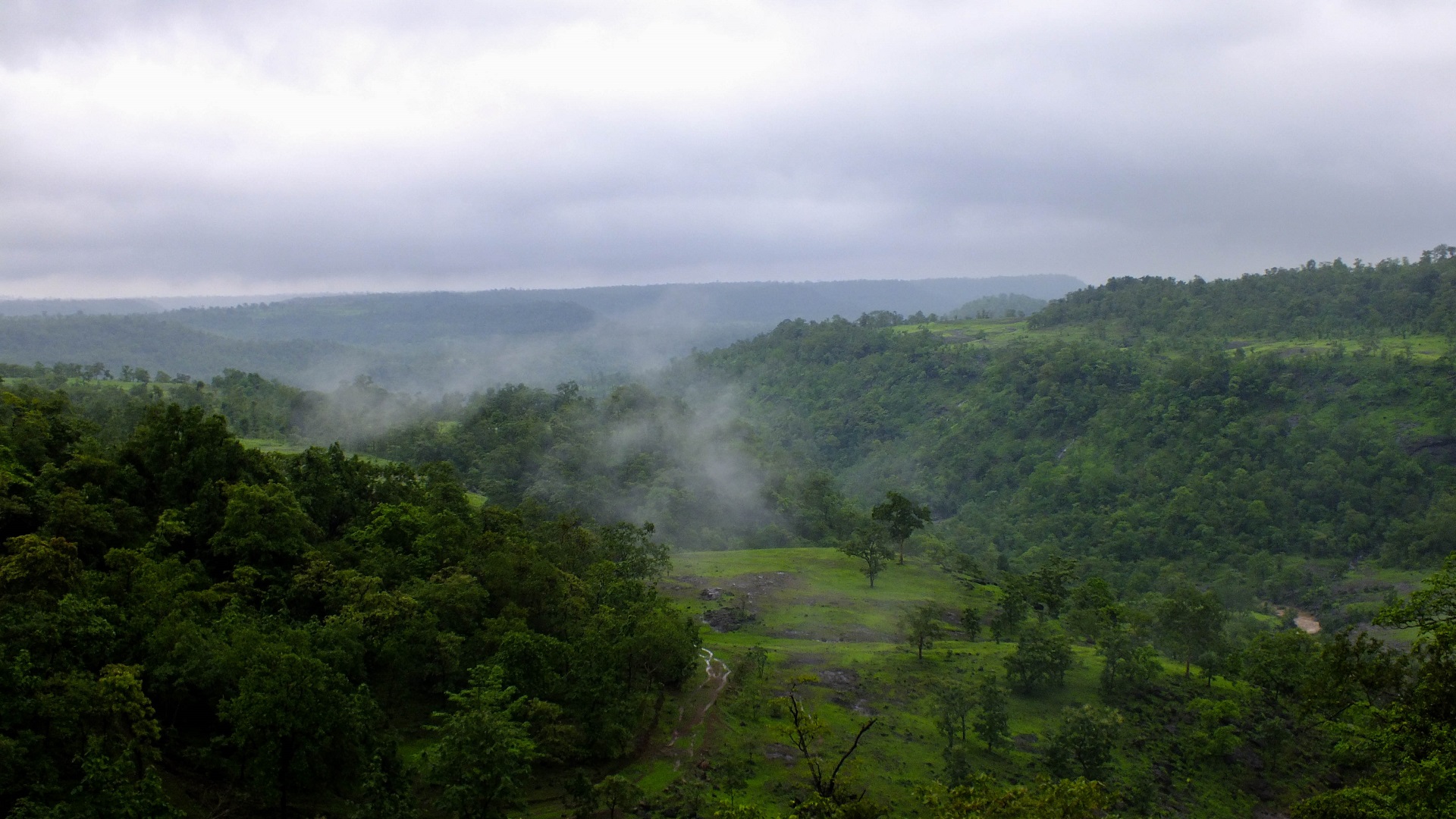 (Be warned that a lot of vehicles seem to be travelling wrong way when we were climbing the ghat. It is probably vehicles coming in from Jawahar Phata, who do not want to take the longer route of climbing up to Igatpuri and come back down again via the correct road. So be careful while charging up the ghats and attacking the corners because a lumbering truck could be coming down around the blind corner) 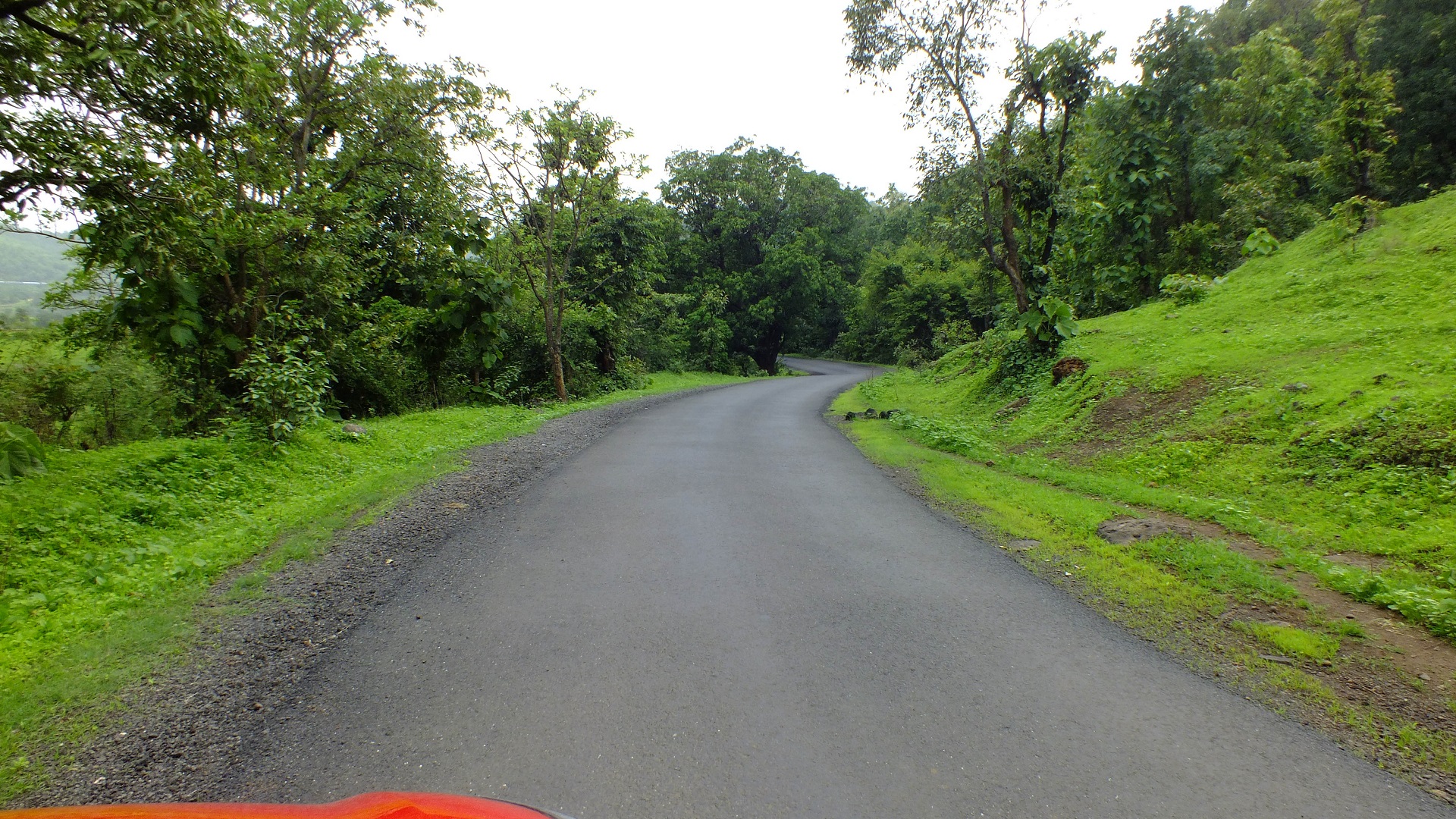 From the NH3 turnoff it is barely 10 min drive to Vihigaon. The waterfalls are on the left of the road and you can easily spot them in their full glory from the main road. The entrance to Vihigaon village is just before the waterfall, and there isn’t any signage (in English at least), so it is very easy to skip the entrance. We also missed the turnoff, and then decided to continue driving a bit before turning around and coming back from the waterfall. 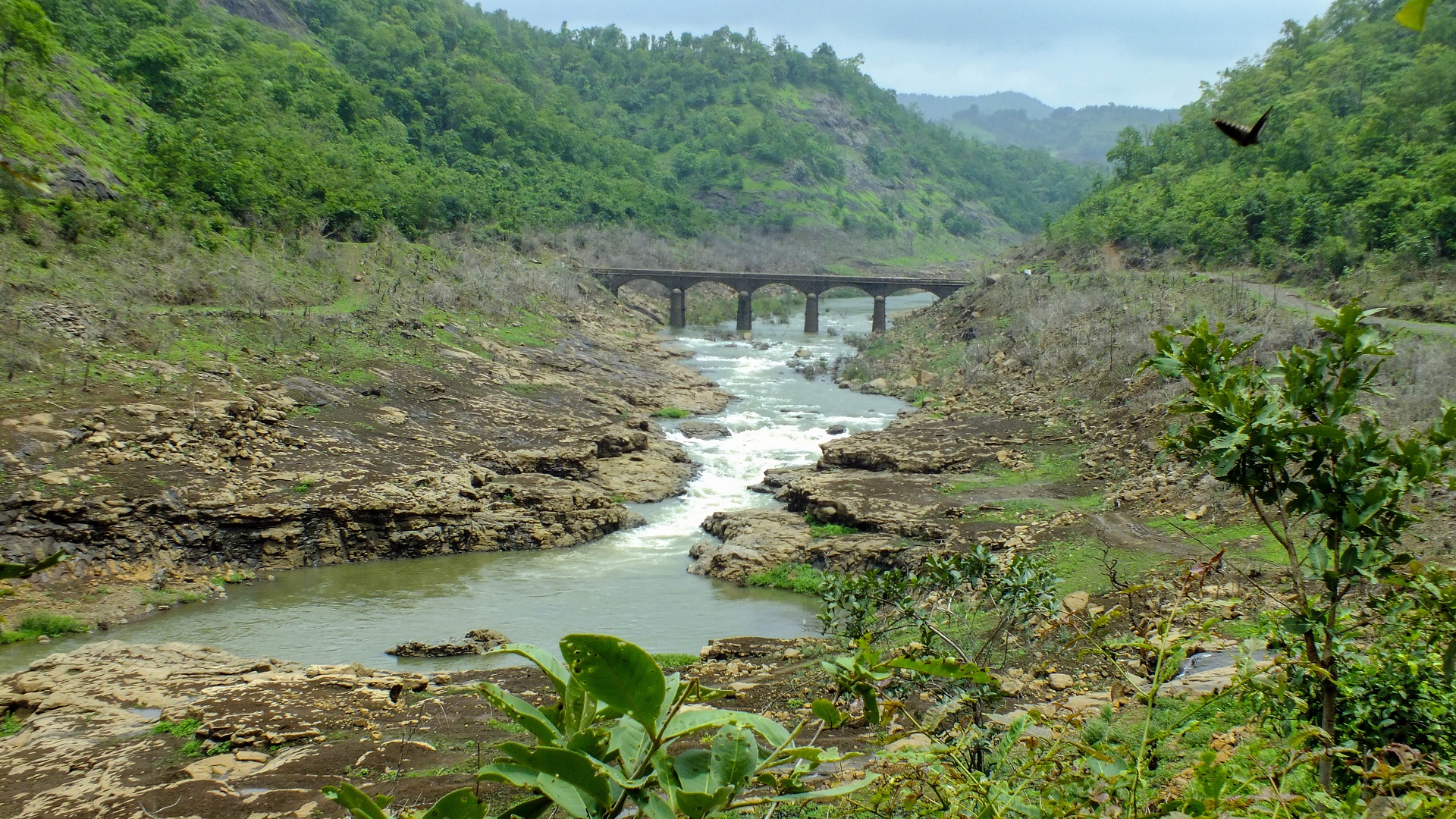 Turned out to be a blessing, as we came across a high newly-built bridge just couple of km from the waterfalls. Travel forums tell us it is the Vaitarna river and the HIGH bridge has been built because the old lower bridge would be submerged by the waters of a under construction dam on the river. Right where the new bridge starts, there is a broken road on the right leading to the old bridge. It is a charming red brick bridge, with just a km of detour. And best thing is that the river flows right next to this abandoned road – and there is a clear dirt track to access the river from there 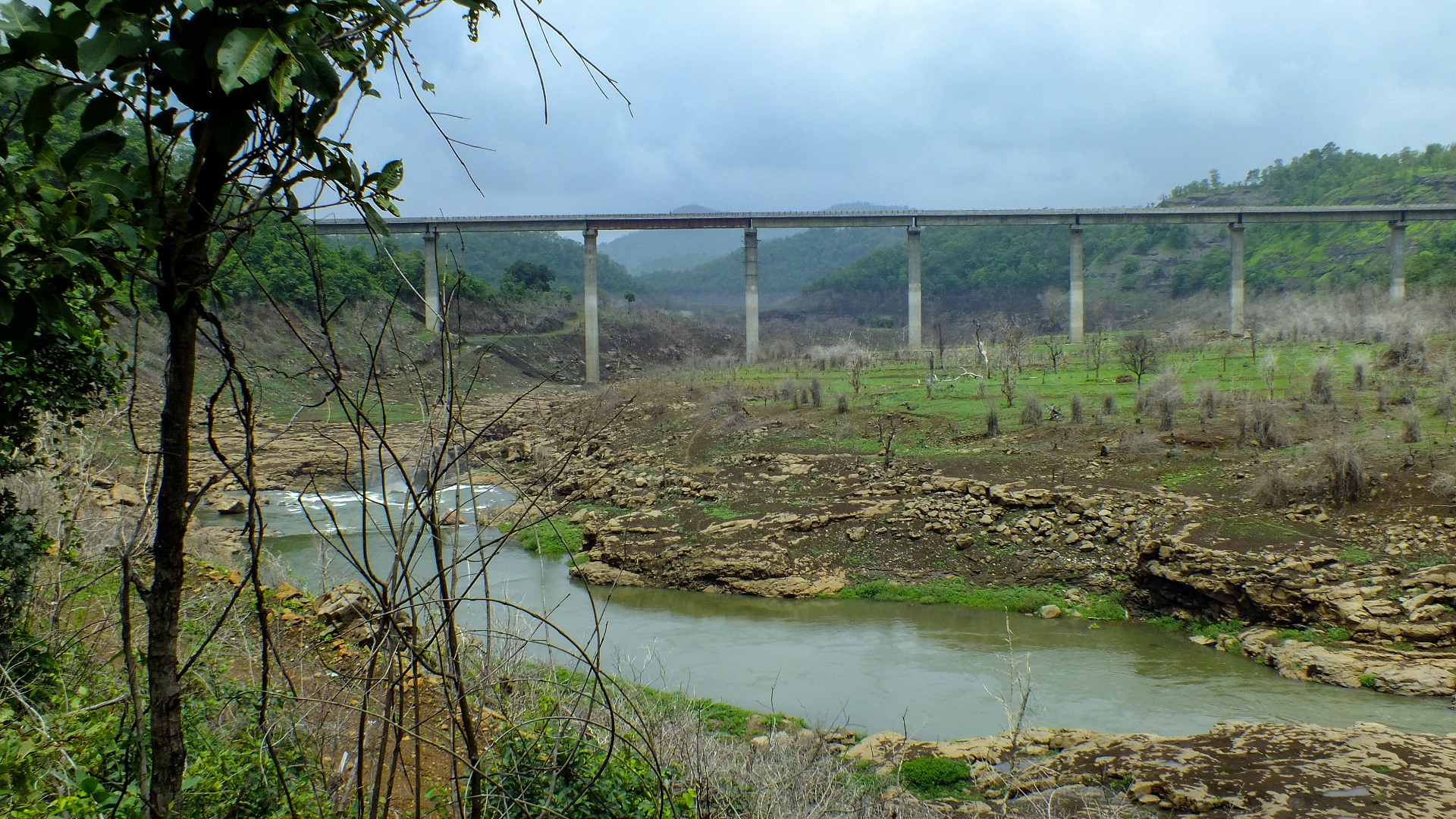 We took the old road, parked the car near the bridge and then headed to the river on foot. With the monsoon water, the river was very swift, deterring us from entering it fully. There were a couple of small waterfalls and rapids, which looked very alluring from the top of the bridge, but a little forbidding from the ground. We found a calmer place and just sat in the stream for about half an hour, enjoying the feel and the sound of rushing water. There might also have been some water throwing at each other. 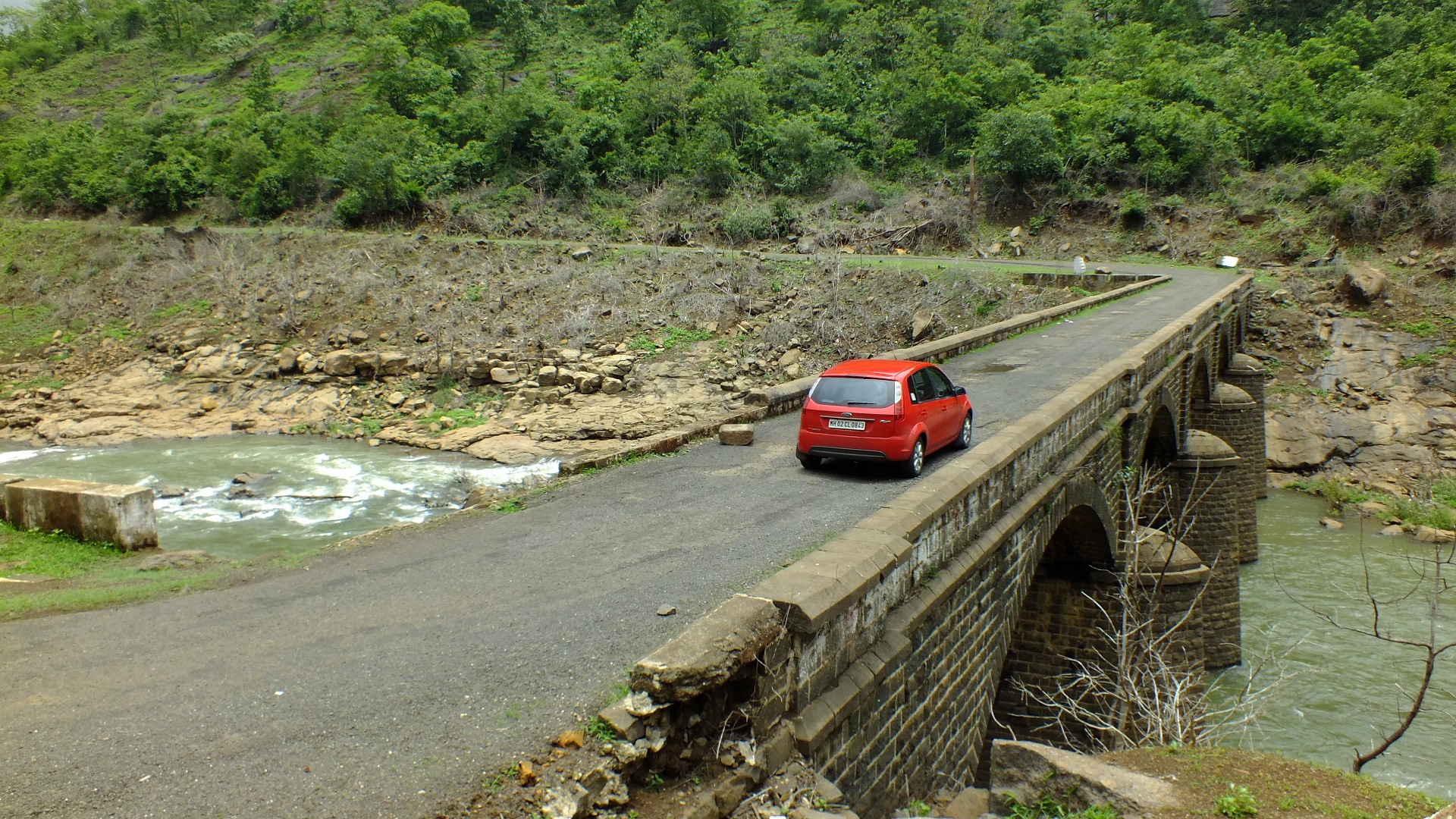 Once we had a taste of water fun, we decided to take the full plunge into the waterfall. After spreading some woeful newspapers on the car seats (really bad idea, dont try it) to park our wet bums, we headed back to Vihigaon. There is a designated area for parking vehicles in a open field and any car which arrives is mobbed by little children who all want to show you the way to the waterfall (or “dhab-dhaba” as they call it). And all the little rascals want to be paid for it (Rs 10 per head), as well as coke/pepsi and any other eatables you have. We gave Rs 10 to one of the kids (and there was quite a fight over it and I was afraid that the note would get torn by them) and 4-5 anyway followed us down to the falls and back again.
(It is very easy to figure out where the falls are – it is about 200m walk from the parking area. So you don’t really need to pay the kids. But Rs 10 isnt much to us, and it probably mean a little more to them)

The villagers (or someone) has hewn steep rough steps to climb down to the valley below, and you can be at the falls within 10-15 min of starting to climb down. The waterfalls were perfect this year, not scrawny like summer and not a deluge in monsoons like Dabhosa. It was perfect to go sit under the waterfall. The river downstream is more a stream than a river – and it is not deep at all – you can mostly walk across the pool to the waterfall. Adventure travel companies from Mumbai organize waterfall rappelling from the top of these waterfalls every weekend. But you need to sign up with them beforehand – they usually do not encourage on-the-spot registrations (and we both had already done waterfall rappelling a few years back) 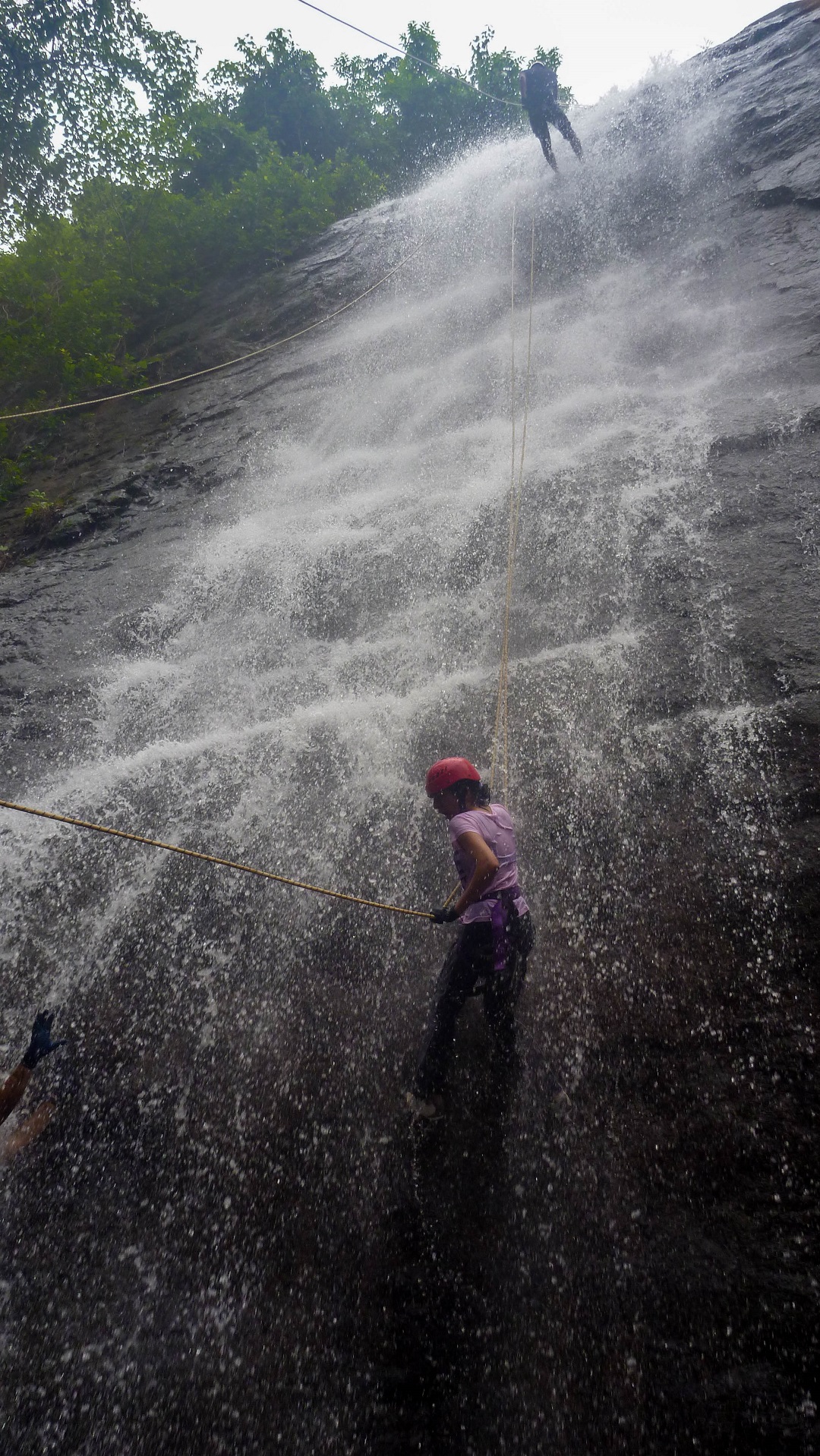 Sitting under a good waterfall is always exhilarating, and this particular waterfall had space to squeeze behind the curtain of falling water. It was the best part of the trip – standing behind the sheet of falling water, filled with roaring sound. We never quite figured out how we spent more than 3 hours at the river and waterfall combined. But we had to get moving as we planned to have lunch at Manas Resort and their lunch is open only till 3 pm. 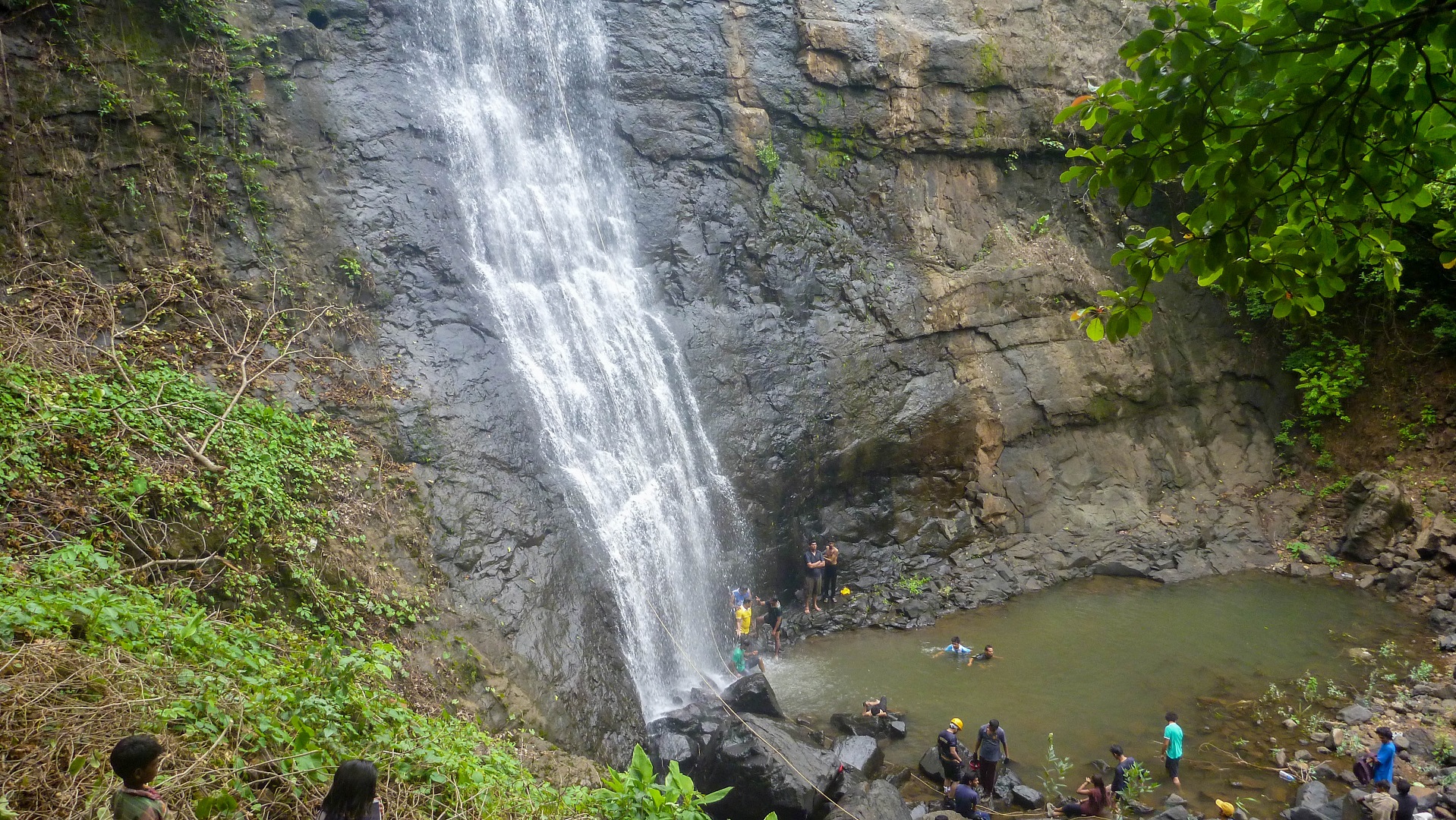 We reached on time for lunch, but unfortunately, their a-la-carte restaurant has been closed down. Only a buffet was on offer. Feeling famished and knowing that other options in Igatpuri werent any good, we went for the buffet. It was very average food and the staff were obviously exhausted towards the end of the lunch service. In our trips around Mumbai over the years, Manas Resort in Igatpuri has stood out as the only gourmet dining location. We loved it’s food so much that we would design our trips to include one meal at Manas Resort. Alas, with the closure of it’s a-la-carte restaurant, that chapter has come to an end.
(We would love to hear from you if there are other such exceptional restaurants around Mumbai)

By the time we were done with our lunch, the skies has opened up with an big roar. I got quite wet in the few seconds it took me to close my umbrella and jump into the car ! The car had all fogged up inside and it took a few minutes for the AC to clear the windows. Once we got back on NH3, there were contended smiles all around as the landscape whizzed past under the curtain of water. The rains lasted the entire duration of the return journey, although it was merely a drizzle by the time we reached home and parked the car. 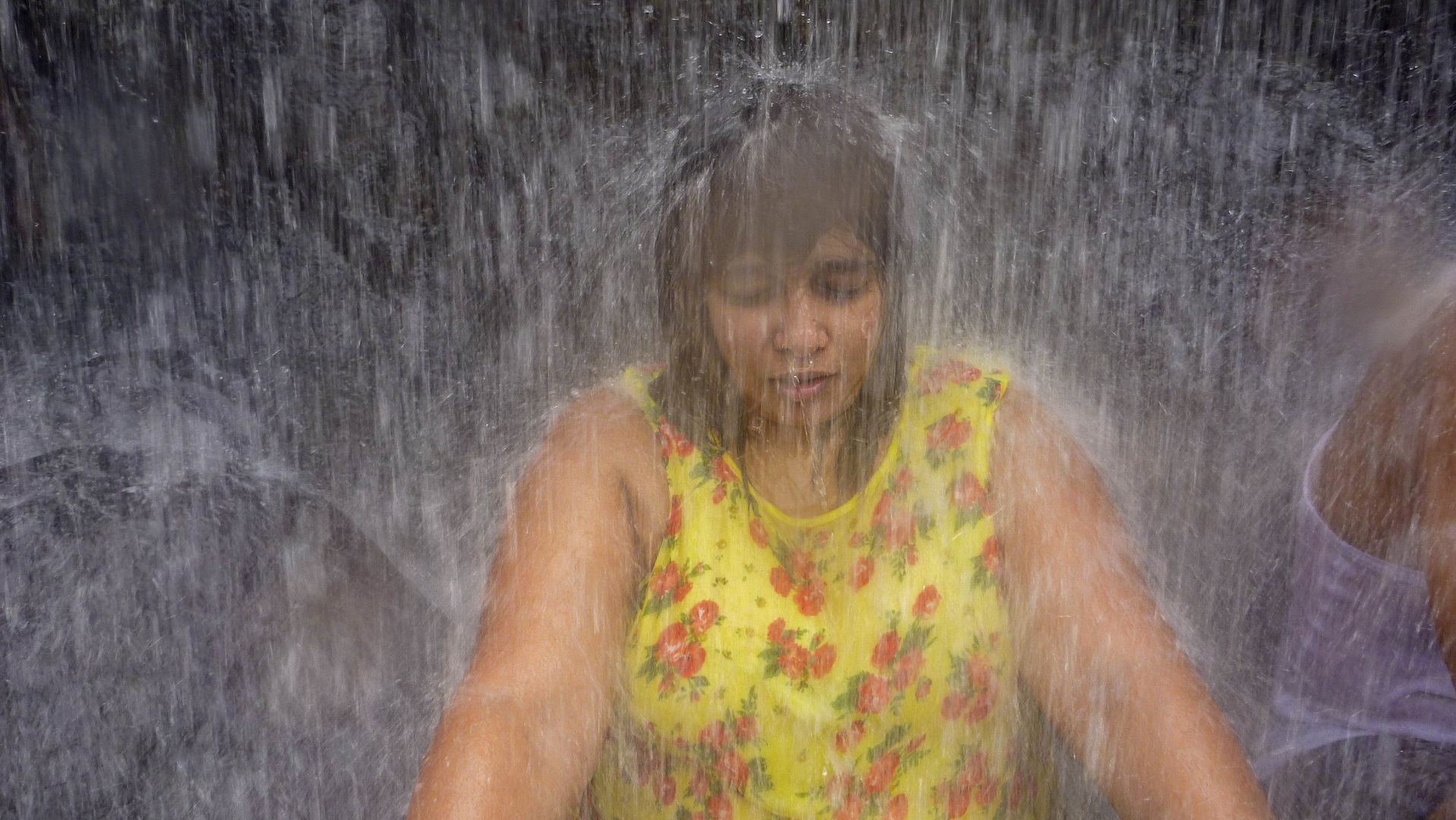 Frolicking under water never gets old and all 4 of us 30+ adults had a wonderful time at Vihigaon Falls. At just 2 hours drive, it is a perfect location to make a daytrip this monsoon